How to Capture Yellow Jackets (and Not Get Stung) 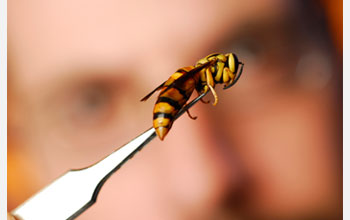 Note: Michael Goodisman received support from the National Science Foundation to study the evolution of phenotype-specific genes in social insects.

Dressed in a white beekeeper suit and full face mask, I pour a small amount of ether into the exit hole of a yellow jacket nest. Too much ether might kill many of the colony inhabitants; too little might allow them enough mobility to attack me. But just the right amount should send the yellow jackets into dreamland.

After a few minutes, my students and I quickly dig up the nest and place it and the yellow jackets into a sealed box. Unfortunately, some angry yellow jackets that weren't affected by the ether always remain behind. As we work, these justifiably disturbed insects fly around menacingly and ram directly into our face shields in an attempt to drive us off. If there is even the slightest opening in our suits, they try to enter and sting us.

Collecting yellow jacket nests is always an adrenaline rush and one part of my job as an assistant professor in the School of Biology at the Georgia Institute of Technology. When metro Atlanta homeowners call me to remove a nest, I'm happy to help. I get yellow jacket colonies to study in my biology laboratory and the homeowner gets rid of a dangerous and irritating pest.

These pests are just one type of social insect, a group that includes ants, social bees, social wasps and termites. Social insects possess the most complex and developed societies of any animal species and engage in cooperative behaviors that allow them to complete extraordinary tasks. For example, termites are capable of working together to build nests many thousands of times their own size, and social wasps and bees engage in highly effective defense of their colonies using mass attacks.

So why study social insects? First, many social insects have direct impacts on humans. For instance, honeybees are critical pollinators of important crops, social wasps are key predators of insects, and many ants and termites are serious pests.

Second, understanding how social insects interact provides direct insight into how complex societies, such as those displayed by humans, operate. Such information can help us understand interactions within human families and between different human groups.

And finally, the formation of social insect societies represents a delicate balance between the selfish interests of the individual and the welfare of the group. The issues governing these relationships are important to understanding such diverse topics as the origin of multi-cellular organisms and the factors governing the occurrence of cancer.

Thus, there are many scientifically important reasons to study social insect societies, but I like to study them because they are so amazing. Watching social insects interact and understanding how their societies function is fascinating.

My research group primarily studies yellow jackets, which are highly social wasps in the genus Vespula. Yellow jackets are highly aggressive and typically construct underground colonies that consist of hundreds to thousands of individuals. Such colonies are often accidentally discovered by homeowners in the spring or summer. Like many social insects, yellow jackets fiercely defend their colonies. Such defensive episodes often result in painful stings for the intruder. Consequently, most people are happy to have us remove any yellow jacket nests on their property.

When we return to the laboratory with our box of yellow jackets, the insects begin to wake up. Not surprisingly, they are not happy to find themselves boxed up and try to force or chew their way out. We place the colony in the refrigerator overnight, which cools the wasps down so they cannot fly. Once the yellow jackets are cold, we conduct genetic and behavioral analyses on the colonies.

Students in my laboratory study the mating behavior of wasps under controlled laboratory conditions. In addition, they are investigating the genetic relationships within the colony and the process of development that leads to queens, workers and males.

Even though most people probably think that yellow jackets and other social insects are just backyard nuisances, understanding their behavior and family dynamics is very important to applied and basic biology.

Related Websites
LiveScience.com: Behind the Scenes: How to Capture Yellow Jackets (and Not Get Stung): http://www.livescience.com/2492-capture-yellow-jackets-stung.html
Georgia Tech Research News Release: http://b.gatech.edu/1RVQcj1