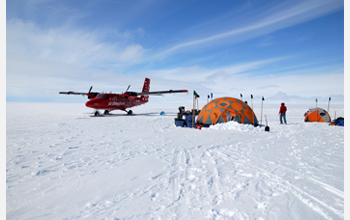 The fast motion of glaciers, which can cause large amounts of ice to be dumped off land into the sea, is a wild card in projections of sea level rise, but estimates of its contribution can still be constrained according to a recent study funded by the National Science Foundation (NSF).

Principal investigator Joel Harper, a glaciologist at the University of Montana, says it is more plausible to expect sea level to rise as much as 80 centimeters by the end of this century, rather than several meters, as some scientists have theorized.

"We have estimated limits on sea level rise during the next century by considering simple constraints on glacier and ice sheet motion," Harper said. "Our work suggests that 0.8 meter of sea level rise is a plausible upper limit, while an upper limit of 2 meters is possible only under extreme conditions and more than 2 meters appears unlikely."

Considering all major sources of sea level rise, including water and ice discharged from Greenland, Antarctica, smaller glaciers and ice caps and the thermal expansion of water as ocean basins warm, the researchers' most likely estimate of roughly 3 to 6 feet by 2100 is still potentially devastating to huge tracts of low lying coastal areas.

"A rise in sea level of 0.8 to 2 meters is still a very serious business, especially for the millions of third-world people who live within a meter of sea level," Harper said.

"We don't understand the physics in enough detail to predict a rise in sea level precisely," Pfeffer said."The problem of maximum sea level rise by 2100 is still rather open-ended. Sea level has risen very fast at times in the geologic past, but those events aren't necessarily good predictors of events in the near future. We need to use the tools we've got to get the best answer we can for the conditions that exist today. While we don't claim that a rise in sea level beyond 2 meters in the next century is a physical impossibility, we believe it is extremely unlikely and would not be a good working model for policy makers and community planners."

"As this study indicates, climate change is an incredibly complex process," said NSF program officer Bill Wiseman. "These research results add another significant piece to the puzzle as we try to understand the various drivers of climate change and the potential consequences of those drivers. Although the work by Joel and his colleagues involves many assumptions, such efforts will be necessary to place realistic limits on future sea level conditions until we are able to model glaciers and ice sheets accurately."

Glaciers add water to the sea through surface melt and by "calving" icebergs. Surface melting of ice cannot alone cause multiple meters of sea level rise by 2100. The marine-terminating glaciers would also need to speed up and discharge an increased number of icebergs into the ocean. The researchers estimated what flow conditions would have to exist for Greenland to raise the sea level by large amounts (2 and 5 meters) in the next century and then asked whether those conditions might reasonably occur.

To construct a truly predictive model of sea level rise is not possible at this time, as scientists simply don't understand the physics of glacier dynamics well enough. For one thing, not all the glacier contribution to sea level comes from Greenland and Antarctica. At present, the world's other glaciers and ice caps contribute nearly double the amount of water that Greenland and Antarctica do. The researchers focused on Greenland because of its vulnerability to Arctic warming, the recent accelerations of glaciers there and its large volume reductions during the last interglacial period. Also, the kind of data required to answer their questions are available for Greenland, but not for most of Antarctica or the remaining glaciers and ice caps.

"For Greenland to deliver 2 meters of sea level to the ocean by 2100 requires that all of the ocean terminating outlet glaciers there move at rates about 40 times faster than they move today, or about three times faster than we have ever observed an outlet glacier move for extended periods," Harper said. "Furthermore, this fast motion must start immediately and must be sustained until the end of the century. While we don't claim that this is a physical impossibility, we believe that it's extremely unlikely and not a good central working hypothesis for making predictions."

Harper and his colleagues will continue their research to understand how much surface melt from Greenland's glaciers actually escapes to the sea from the ice sheet covering the continent. They are also working to understand more about the glacier calving process and outlet glacier dynamics with a detailed study of Alaskan tidewater glaciers. Finally, by installing numerous sensors at the bed of an Alaskan glacier, they are studying how water at the base of glaciers causes increased ice motion.