Volcanoes, Not Asteroid, May Have Taken Out the Dinosaurs 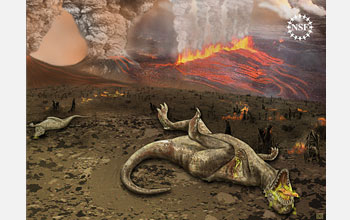 A series of volcanic eruptions in India may have killed the dinosaurs.

The dinosaurs died gradually from climate change caused by a series of severe volcanic eruptions in India at the end of the Cretaceous period, says Gerta Keller, professor of geosciences at Princeton University. This theory contradicts the long-held notion that the dinosaurs died due to climate change when a giant meteor hit the Yucatan region of Mexico.

Keller's theory has not yet been adopted by the broader scientific community, but it is rapidly gaining traction as she and her colleagues, funded by the National Science Foundation, report findings from their field work in India and Mexico. The most significant finding is geologic evidence that the mass extinction and the impact of the giant meteor occurred at two different times.

"The Chicxulub impact hit the Yucatan about 300,000 years before the mass extinction that included the dinosaurs and therefore could not have caused it," Keller says. "We know the age of impact because my team discovered a layer of tiny glass melt-rock spherules in Mexico and Texas." The spherules formed when the rocks were vaporized by the impact and blown into the stratosphere--and then rained down over North and Central America. "This glass spherule layer marks the precise time of the impact 300,000 years ago," she notes.

The sediments and fossils in the older sediments below the spherule layer and younger sediments above it reveal how life was affected by the impact.

"We see no change, not a single species died out, so the mass extinction 300,000 years later must have been caused by another catastrophe," Keller says. She's firm in her belief that the other catastrophe was a series of volcanic eruptions in the Deccan Traps, a volcanic mountain range that covers much of India today. The mountains, which today are 12,000 feet high, were much higher in prehistoric times.

"Volcanic eruptions poured out lava flows after lava flows, stacking them like a layer cake," she says. "The total volume in cubic miles was greater than the Rockies and the Sierras combined."

Related research by volcanologists Vincent Courtillot, Steve Self, Mike Widdowson, and Anne Lise Chenet shows the lava eruptions were not continuous but occurred in pulses, with each pulse lasting about 10--to at most 100--years, and the pulses were separated by short time periods of quiescence. New results from eight subsurface cores drilled by the Oil and Gas Corporation of India in the Krishna-Godavari Basin of eastern India reveal that at least nine lava flows mark the critical volcanic phase that ended in the mass extinction. This ending phase may have occurred over as little as 10,000 to 100,000 years. For each lava eruption, fire shot in tall columns from fissures in the Earth's surface and lofted gases into the stratosphere while the oozing lava spread sheet-like, or in rivers, up to 650 miles across India, and formed the longest lava flows on Earth.

"Their destructive nature is evident in the marine life record, which decreased by about 50 percent after the first of these long lava flows," Keller said. "By the time of the last lava flow, the mass extinction was complete."

The sulfur dioxide gas injected into the stratosphere converted to sulfate aerosols that caused climate cooling. The cooling lasted until the sulfate aerosols washed out as acid rain and caused the ocean to acidify in the process.

Research on smaller and more recent eruptions, such as the Laki eruption of Iceland in 1783-1784, clarified for scientists the extreme climate effects of volcanic eruptions and the resulting death and destruction of humans, animals, plants and marine life. In spite of the widespread devastation caused by Laki, mass extinction did not occur. The more recent example of Mt. St. Helen's in Washington State has shown just how quickly a local ecosystem can come back after a volcanic eruption.

Then why did it take Earth's ecosystem half a million years to fully recover after the mass extinction that killed the dinosaurs?

"The answer seems to be the occurrence of at least four additional massive Deccan eruptions about 280,000 years after the mass extinction," Keller says. "After those final eruptions, Earth began a full recovery leading to the evolution of life as we know it."

Keller doesn't disagree with scientists who believe the Chicxulub impact affected climate. The event would certainly have caused earthquakes, tsunamis, regional fires and injected huge quantities of sulfur dioxide into the stratosphere, causing cooling and acidification of the land and oceans. "The difference is that the quantity of gas injection from the main phase of Deccan eruptions was 30 to 100 times larger than the Chicxulub impact and occurred over as little as 10,000 to 100,000 years, with each pulse lasting about 10 years or more."

Up until now, skeptics have doubted whether gas from Deccan-like eruptions reaches the stratosphere, but the relatively small 1783-1784 Laki eruption in Iceland revealed that even rather small eruptions loft gases into the stratosphere.

Until recently, it was also believed that the last phase of Deccan volcanic eruptions occurred over a million-year period, which would have been long enough for the environment to recover between eruptions, thus preventing a runaway extinction effect. Vincent Courtillot and collaborators from the Institut de Physique du Globe de Paris have recently discovered that the main phase of Deccan eruptions was much shorter and culminated near the Cretaceous-Tertiary boundary. Known as the "K-T boundary" to scientists, it marks the end of the Mesozoic Era and is associated with the mass extinction.

Most importantly, field work by Keller and her collaborators revealed that the mass extinction coincided with the end of the main phase of Deccan eruptions suggesting that volcanism is the "smoking gun" that killed the dinosaurs.

"These new discoveries have made the volcanism-mass extinction theory a very viable cause for the end-Cretaceous mass extinction," Keller says.

According to NSF Program Director Harold Lane: "Dr. Keller's recent NSF-supported research stokes continued debate about the cause of the near extinction of earth's biota at the end of the Cretaceous--a major event in the history of life on earth."

Keller and her collaborators will present talks and papers about their findings at the December 2008 AGU meeting in San Francisco. Their work will also be included in an upcoming History Channel feature titled What Really Killed the Dinosaurs.