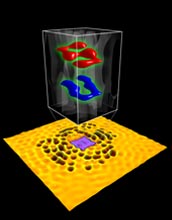 Two pages of information, the red and blue letters, are retrieved from a data cube.

A novel technique that enables researchers to push individual molecules into specifically arranged patterns recently allowed researchers at Stanford University to shatter the long held belief that one bit per atom is the limit for encoding information and reclaim the title of producers of the world's smallest letters.

Researchers Hari Manoharan and Christopher Moon along with students at Stanford's Physics Department and Geballe Laboratory for Advanced Materials were able to encode 35 bits of information per electron and write letters so small, they are composed of subatomic bits of size 0.3 nanometers, or roughly one third of a billionth of a meter.

The feat edges out researchers at Japanese firm Hitachi, who in 1991 set the record for microscopic calligraphy by chiseling 1.5-nanometre-tall letters into a certain type of crystal.

Stanford's research is supported by the National Science Foundation, the Department of Energy's SLAC National Accelerator Laboratory, the Stanford Institute for Materials and Energy Science, the Office of Naval Research, and the Stanford-IBM Center for Probing the Nanoscale.

Researchers say the small size of letters could enable information to be stored more densely providing greater speed and storage capacity for modern computers. In fact, the letters formed, an "S" and a "U" for Stanford University, are so small they could be used to print the 32-volume Encyclopedia Britannica 2,000 times and the contents would fit on the head of a pin.

To shrink the letters, Manoharan and Moon used a scanning tunneling microscope to arrange individual carbon monoxide molecules on a copper surface in a complicated two-dimensional pattern engineered with a void in the middle into which they desired to project electronic versions of the letters.

They then used the constant flow of electrons naturally present on the copper surface to form the letters. The electrons, rippling over the surface as waves, scattered off any carbon monoxide molecules they met and worked to project holographic patterns of the letters into the void.

The letters were formed in the void by waves of quantum electrons with very small wavelengths. In this way, the two-dimensional pattern of molecules functioned as a molecular-sized hologram, illuminated with electrons instead of light.

"Imagine the copper as a very shallow pool of water into which we put some rocks [the carbon monoxide molecules]," says Manoharan. "The water waves scatter and interfere off the rocks, making well-defined standing wave patterns." If the rocks are positioned just right, the wave patterns will form into letters.

Called "Electronic Quantum Holography," the process was carried out in a vibration proof basement on Stanford's campus.

"In this experiment we've stored some 35 bits per electron to encode each letter," said Manoharan. "We write the letters so small that the bits that comprise them are subatomic in size. So one bit per atom is no longer the limit for information density. There's a grand new horizon below that, in the subatomic regime. Indeed, there's even more room at the bottom than we ever imagined."

A paper on Manoharan's and Moon's work, "Quantum Holographic Encoding in a Two-Dimensional Electron Gas," was published online in Nature Nanotechnology.