Orangutans in the Mist 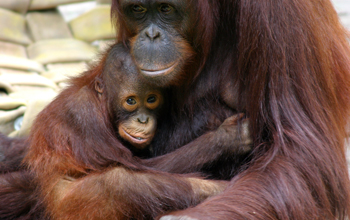 Satu and Miri are a mother-son orangutan pair housed at Zoo Atlanta.

For the last 18 years, Cheryl Knott of Boston University has been racing the clock. While she researches orangutans in the rainforests of Gunung Palung National Park in Borneo, the numbers of this magnificent ape steadily plummet.

The outlook for orangutans--one of human's closest relatives--is dire because there are only a few tens of thousands of them currently left in the wild, and they are found in only two places: the Sumatran rain forests, where they are critically endangered; and the Borneo rain forests, where they are endangered. The decline of the Sumatran and Bornean populations of orangutans is caused by varied threats, such as illegal logging, the conversion of rain forest to palm oil plantations and farmland, poaching and the pet trade.

What's more, orangutans reproduce slowly. In fact, "orangutans have the longest interval between births of any mammal," said Knott, only giving birth once every eight to nine years. The resulting slow birth rate of orangutans increases their vulnerability to conservation threats.

"So researching orangutan reproduction helps us to better understand what we need to do to preserve the species," Knott said. She has advanced our understanding of orangutan reproduction by identifying important relationships between what--and how much--orangutans eat and their reproductive patterns. This kind of information can help government institutions identify the best areas to protect in order to conserve orangutans.

"So suppose, for example, there were a proposal to preserve the tops of mountains, which may be forested but do not provide the types of food that orangutans need," said Knott. "Then, we could say that is not a sustainable orangutan habitat and recommend preserving areas that would provide sustainable food for orangutans."

It often takes Knott and her team many hours to find one of these elusive apes. Once they find an orangutan, they follow that individual for as long as possible, often over many days, collecting detailed data on its behavior, including what it eats. She also collects hormones from orangutan urine that falls onto mats that are strategically placed on the ground. Knott's analyses of these hormones reveal insights into orangutan reproduction.

Because orangutans are agile tree climbers and use a different nest every night, finding and tracking them is no easy task, requiring Knott to follow her study subjects in hot pursuit through the forest. Such pursuits often involve forging swift rivers and avoiding dangers such as snakes, bears, and falling tree limbs, and scrambling up steep mountains--sometimes in the dark before dawn. She must also tolerate creepy annoyances, such as leaches, sweat bees and other "interesting critters," as Knott calls them.

Through the years, as Knott has continued her research, she has witnessed the threats to orangutans increase. She explained: "When we first started working in Borneo, you really weren't aware of illegal logging going on in the national park. And then, after a while, in 2000, we started hearing the sounds of chainsaws coming closer and closer until they were actually on the outskirts of our research site. There were times when you would go up river and see hundreds of men logging various parts of the forest."

The ever-increasing din of chainsaws inspired Knott to start a conservation program with local villagers to educate them about the importance of preserving the rainforest and protecting orangutans and other forest animals.

"There was a realization that we really needed to work with the local people--many of whom had never seen a wild orangutan or even knew about the national park," Knott said. "As scientists, part of our responsibility is to educate local villagers and let them know about this incredible resource and how unique the animals in the rainforest are. I think a very important aspect of modern primate studies is reaching out and working on conservation with local people, as well as doing your research."

Among the components of Knott's conservation program--called the Gunung Palung Orangutan Conservation Program--are a radio show, field trips to the national park, curriculum development, lectures about conservation and an environmental education center for local villagers. In addition, Knott is also working with villagers to "find alternatives to logging and ways to make their own lands more productive so they don't have to cut down more forest," she said."We are helping them increase their income without destroying the forest."

Knott's organization also works with the local governments to investigate people who have illegal pet orangutans and then accompanies the authorities when the animals are confiscated.

As hopeful signs, Knott said that illegal logging has slowed down, and that her conservation program has helped create much more of a conservation-minded community. "When we first started, conservation wasn't something that the local villagers ever thought or talked about," she said."Now, people are very much aware, and they'll bring up issues like watershed management, which is one of the topics we cover in our radio program."

Nevertheless, threats to orangutans are still mounting. Among the growing problems in orangutan territory is the conversion of rainforest into palm oil plantations, a practice common with large-scale industries producing consumer goods. Palm oil is used in many products, from food products to engine lubricants to a base for cosmetics.

"So, in some ways, there's been perhaps less illegal logging because there's been more cutting down of the rainforest to build palm oil plantations," said Knott.

Gunung Palung National Park is currently surrounded by palm oil concessions. These concessions isolate populations of orangutans that live outside the park and thereby increase their vulnerability to conservation threats.

"It's a constant battle," said Knott. "I think we're definitely going to continue to lose more rainforest habitat before it stops. The hope is that the rate will slow down and eventually stop, at least within national parks and reserves. And I am still hopeful that our park will continue to be protected and that it will continue to provide refuge to orangutans and other forest animals in the future."