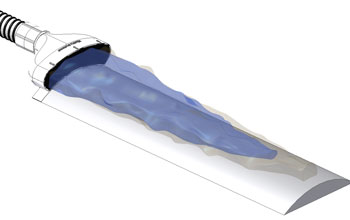 A 3-D rendering of the Air Barrier System area of protection.

The Air Barrier System, or ABS, creates a "cocoon" of highly pure air that surrounds a surgical incision site. The cocoon isolates the incision from ambient air to prevent the bacteria present in the operating room from infecting the patient.

During surgery, bacteria are continuously shed by operating room personnel into the air and can subsequently settle in and around an incision site. The organisms, such as Staphylococcus aureus, are a major cause of infections in prosthesis implant surgeries such as hip and knee replacements.

The portable ABS device prevents contamination without disrupting the surgical procedure or impeding access to the incision area, making the device relatively easy to use.

The ABS consists of two components: A non-sterile, reusable blower unit that provides the source of HEPA filtered air, and a sterile, disposable nozzle that is affixed onto the surgical drape adjacent to the incision.

In 2009, Nimbic Systems received funding from the National Science Foundation (NSF) to conduct ABS pilot trials, with the goal of determining the degree to which localized, directed HEPA air flow generated by the ABS reduced the amount of airborne particulates and colony-forming bacteria in the surgical field during total hip arthroplasty.

Orthopedic joint arthroplasty, spinal procedures, thoracic and vascular procedures, and other long-duration procedures are high-risk for infection. Not only is the risk of harm to the patient a concern, but costs from the infections can reach up to $100,000.

The results of the preliminary hip arthroplasty trial revealed that the ABS reduces the presence of microorganisms at the incision site by greater than 84 percent.

Based on the data obtained in the pilot trials, the FDA approved the ABS for use in hip arthroplasty procedures, while future trials planned for later this year will investigate spine and femoral popliteal procedures.