The Snows of Mount Washington

Climate and environmental change in the U.S. northeast corridor 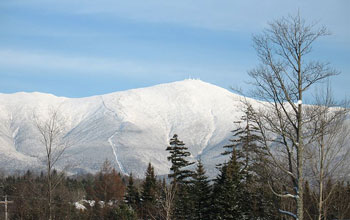 Kilimanjaro is a snow-covered mountain 19,710 feet high, and is said to be the highest mountain in Africa. Close to the western summit there is the dried and frozen carcass of a leopard. No one has explained what the leopard was seeking at that altitude. --Ernest Hemingway, The Snows of Kilimanjaro

It's March, but a big snow has fallen in the U.S. Northeast for perhaps the first time this winter.

What's going on in traditional New England "snow towns" like Boston, Burlington and Brattleboro--and atop New Hampshire's famed Mount Washington, which is often snow-covered through July?

Is this seemingly snowless winter a blip on the radar screen, or a harbinger of things to come?

What will Earth's climate be like in a century, a decade or sooner? And what will it be like where you live, if you're in Massachusetts, Vermont or other Northeastern states?

NSF recently awarded 29 grants to study the consequences of climate variability and change.

"The EaSM projects will expand the limits of our understanding of Earth's climate system," says Tim Killeen, NSF assistant director for Geosciences.

"They will lead to better ways of predicting climate change. The knowledge being developed will result in improved, science-based decision-making about our common future."

The consequences of climate variability and change are more immediate and profound than previously anticipated, scientists believe.

Prolonged droughts; increasing stresses on natural and managed ecosystems; loss of agricultural and forest productivity; degraded ocean and permafrost habitats; global sea-level rise and the rapid retreat of ice sheets and glaciers; and changes in ocean currents have shown that climate variability and change may have significant effects on decade and shorter time scales.

The effects, researchers have found, for humans and other animals, plants and physical systems such as the oceans may be far-reaching.

EaSM awardees such as scientist Charles J. Vorosmarty of the City University of New York and colleagues are studying the alterations taking place in the U.S. Northeast.

"This region reflects many of the changes across the nation's landscapes and watersheds," says Vorosmarty. "Because of its long history of development, it provides a unique lens to look at options for managing large-scale natural systems."

"Such human actions will continue," says Vorosmarty, "and likely be more difficult to manage in a rapidly changing climate and environment.

"We will have major challenges trying to balance such needs as improving energy efficiency, maintaining water quality and deciding how best to manage the billions of dollars that will be needed for civil and private infrastructure."

Because the atmosphere, land and aquatic systems, rivers and streams, and the ocean are closely linked through water and biogeochemical cycles, change to one has the potential for system-wide feedbacks and unintended consequences.

The EaSM team is working to develop a Northeast Regional Earth System Model that improves the ability to forecast implications of planning decisions on the region's environment, energy use and economy through the 21st century.

"The model will be the first to integrate the human causes of decadal climate change with land and aquatic ecosystems, and with the ‘ecosystem services' they provide to all of us, as well as with socioeconomic effects and management and policy decisions," says Elizabeth Blood, program director in NSF's Biological Sciences Directorate, which supports Vorosmarty's award.

The EaSM grants are also funded by NSF's Directorates for Geosciences, Mathematical & Physical Sciences, Computer & Information Science & Engineering, and Social, Behavioral & Economic Sciences and its Office of Cyberinfrastructure and Office of Polar Programs.

"The research will provide new insights," says Blood, "into the complex links among human and ecological systems and critical Earth processes operating on decadal and regional scales."

The model is being used to test whether there are significant consequences of worldwide and nationwide human decisions on the northeastern region's environment.

"We hope that our research will be a major step forward in understanding the state of large, interacting human and natural systems, with results that can be used to inform policy decisions," says Vorosmarty.

To look forward, however, one must first look back.

As a first step, the colonial hydrology of the northeastern U.S. has been reconstructed by Vorosmarty and other geoscientists, biological scientists and social scientists.

Their findings, which extend to the year 1600, are a new way of uncovering the past.

Throughout American history, water resources have played an integral role in shaping patterns of human settlement and networks of biological and economic exchange.

The scientists divided their study area into three geographic and socio-political sub-regions: New England, the Middle Colonies and the Chesapeake.

They then looked at the ways in which variables such as soil, vegetation and climate combined with socio-political factors to influence each sub-region's hydrologic environment.

The Chesapeake region, on the other hand, was settled largely by young, unskilled men who cleared trees and planted tobacco fencerow-to-fencerow. Their efforts caused extensive erosion, which dramatically altered rivers.

The Middle Colonies were characterized by diverse social, cultural and religious traditions, and by feudal-style estate agriculture.

These past activities need to be integrated into today's analyses of land-cover change and climate change, says Vorosmarty. "The key lesson is that the effect of decisions made long ago lasted for hundreds of years. The future will hold the same."

New information from the Northeast Regional Earth System Model will allow researchers like Vorosmarty to diagnose the health of the regional environment, including its climate.

"What direction that's heading," says Vorosmarty, "is a weathervane for us as well. If we want to change where it's pointing, the time is now."

Whether on New Hampshire's Mount Washington or Africa's Mount Kilimanjaro, whither the snows go, so, too, may we.