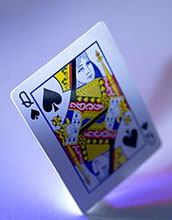 The Queen of Spades card has led scientists to a new evolutionary hypothesis.

Sleight of hand is a trait that belongs mainly to humans.

Or so scientists thought.

Studies of common, microscopic ocean plankton named Prochlorococcus show that humans aren't the only ones who can play a mean game of cards.

Their method lurks in the Black Queen Hypothesis, as it's called, after the Queen of Spades in the card game Hearts.

Scientists Jeffrey Morris and Richard Lenski of Michigan State University and the BEACON Center for the Study of Evolution in Action, and Erik Zinser of the University of Tennessee, Knoxville, knew that smaller genomes were the norm in symbiotic microbes--those that have reciprocally beneficial relationships--but wondered how non-symbionts got away with cutting out functions it appeared they needed.

These non-symbiotic microbes, the researchers found, may be getting others to do the hard work of living for them.

The biologists published their results in a recent issue of the journal mBio, in a paper titled: "The Black Queen Hypothesis: Evolution of Dependencies through Adaptive Gene Loss."

"Black Queen" sets forth the notion that eliminating a necessary function confers an evolutionary advantage--as long as your neighbors continue to do the work. "It would make sense for a microbe to want to lose a gene that's a burden," says Morris, "and get someone else to pick it up."

In the game of Hearts, the winning strategy involves avoiding the Queen of Spades.

To test the Black Queen Hypothesis, the researchers applied it to a genus of microbes that has been the source of scientific confusion. Prochlorococcus, one of the most common groups of plankton in the open ocean, has a much smaller genome than biologists would expect in free-living bacteria.

How has Prochlorococcus been so successful in colonizing the sea while jettisoning seemingly important genes, including the gene for catalase-peroxidase, which lets the microbes neutralize hydrogen peroxide, a compound that can damage or kill cells?

Prochlorococcus, it turns out, relies on other microorganisms to remove hydrogen peroxide from the environment, says Zinser, "allowing it to dump its responsibilities on the unlucky card-holders floating around nearby."

It's a clear instance, Zinser says, of one species making out like a bandit while letting other members of the community carry the load.

"People often think about evolution as leading to more and more complex organisms, and that's often, but not always, the case," he says. "Sometimes organisms evolve to become simpler if that saves time or energy."

Under the Black Queen Hypothesis, these simpler organisms take advantage of "helpers" that perform essential functions. In that sense, beneficiaries are "cheaters" that exploit what might be called a public service.

Sometimes they contribute in other ways. Prochlorococcus, which benefits from the peroxide clean-up performed by other microbes, contributes energy through photosynthesis that supports the larger community.

The Black Queen Hypothesis describes an evolutionary process that may include cheating, but in other ecological contexts, may result in neutral or positive interactions between species.

Take Shooting the Moon, an alternate route to victory in Hearts. This risky move requires a player to capture all the point-scoring cards, including the Queen of Spades, the opposite of the usual strategy of minimizing one's points.

"Such an outcome would involve evolution toward a niche with high resource requirements," write the scientists in their paper, "but with the advantage of high 'job security' for the helper owing to the dependence of the community on its continued well-being."

The scientists ask, what forces lead to the reliance of communities on keystone organisms, whose extinction can lead to instability and potential catastrophe?

In the game of Hearts--or the game of life--the Queen of Spades, it turns out, may be the most important card.

Related Websites
NSF BEACON Center for the Study of Evolution in Action: http://beacon-center.org/