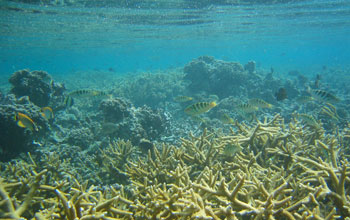 Symbiodinium, it's technically called, but more popularly it's known as zooxanthellae.

Either way, these microscopic algae that live within a coral's tissues hold the key to a tropical reef's ability to withstand environmental stresses.

The effects on tropical corals of global warming, ocean acidification, pollution, coastal development and overfishing may all come down to how choosy the corals are about their algae tenants.

Reef corals are the sum of an animal and the single-celled algae that live inside its tissues. The animal is called the host and the algae are called endosymbionts.

It's a mutually beneficial arrangement. The corals provide the algae with protection in sunlit, shallow seas. The algae produce large amounts of energy through photosynthesis, which the corals use to survive and to build their skeletons.

The stability of this symbiotic relationship is critical to corals' survival. When corals lose their algae, they bleach out and often die.

Researchers at the University of Hawaii and other institutions have found that the more flexible corals are about their algal residents, the more sensitive they are to environmental changes.

"It's exactly the opposite of what we expected," says Hollie Putnam of the University of Hawaii and lead author of a paper published this week in the journal Proceedings of the Royal Society B.

"The finding was surprising; we thought that corals exploited the ability to host a variety of Symbiodinium to adapt to climate change."

"The relationship of corals to the algae that live within them is fundamental to their biology," says David Garrison, a program director in the National Science Foundation's (NSF) Division of Ocean Sciences, which funded the research.

"This study gives us an important new understanding of how corals are likely to respond to the stresses of environmental change."

The research was conducted at NSF's Moorea Coral Reef Long-Term Ecological Research (LTER) site, one of 26 such NSF LTER sites around the globe in ecosystems from deserts to freshwater lakes, and from forests to grasslands.

Putnam and colleagues took samples from 34 species of corals at the Moorea LTER site. By analyzing the DNA from the algae in the samples, they identified the specific species of Symbiodinium.

The findings reveal that some corals host a single Symbiodinium species. Others host many.

"We were able to link, for the first time, patterns in environmental performance of corals to the number and variety of endosymbionts they host," says Putnam.

The patterns show that corals termed generalists--those that are flexible in their choice of algae residents--are more environmentally sensitive.

In contrast, environmentally resistant corals--termed specifists--associate with only one or a few specific species of Symbiodinium.

Generalists such as Acropora and Pocillopora are some of the most environmentally sensitive corals.

Conversely, specifists such as Porites harbor few Symbiodinium species and are environmentally resistant.

"Coral reefs are economically and ecologically important, providing homes for a high diversity of organisms and are necessary for food supplies, recreation and tourism in many countries," says Gates.

"The better we understand how corals respond to stress, the more capable we will be of forecasting and managing future reef communities."

It's likely that the reefs of tomorrow, say Putnam and co-authors, will be shaped by the coral-Symbiodinium assemblages of today.

In the roulette of coral species on a tropical reef, Porites may be the clear winner.