An audio pioneer who has worked with the likes of Stevie Wonder, Bon Jovi and Pink Floyd continues to provide innovative devices to perfect sound quality and alleviate in-ear pressure and listener fatigue 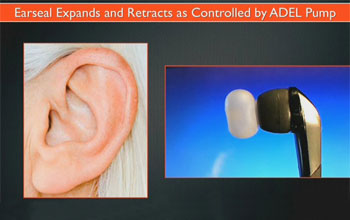 An audio pioneer who has worked with the likes of Stevie Wonder, Bon Jovi and Pink Floyd, Stephen Ambrose is on a quest to perfect sound quality. His most recent innovation is a modification for ear buds, hearing aids and other in-ear devices that alleviates pressure and its subsequent "listener fatigue"--the discomfort and even pain some people experience with devices that seal the ear canal.

To better understand what led to this discovery, we must look back to Ambrose's musical career, which led to his founding of Asius Technologies. As a musician, Ambrose wanted an alternative to temperamental stage monitors, which required very particular volume controls to function properly, and gave distracting feedback.

His solution was to invent the Micro Monitor, the first in-ear sound monitor. Each Micro Monitor was custom-fit for each ear. The device helped to prevent feedback and ultimately replaced bulky sound equipment. A circuit in the Micro Monitors allowed each monitor to adapt to a musician's given environment.

"This circuit was an acoustic path that allowed the reverse pressures created in the back of the speaker to mitigate the harmful pressures caused in the ear canal," said Ambrose.

Ambrose also developed Micro Mics--microphones that could be mounted on instruments, replacing mics that picked up superfluous sounds.

Not only were the Micro Monitors and Mics efficient, they made costly stage equipment and transport unnecessary. They quickly gained popularity as well as high-profile users such as Diana Ross and Guns N' Roses.

But Ambrose came to realize that in-ear monitors caused discomfort after prolonged use. He purchased sound equipment to remove the audio fatigue and over-excursion caused by the devices, only to learn that these issues could not be engineered out of the sound mix, because their root was physiological.

In a paper presented at the Audio Engineering Society convention in May 2011, Ambrose and his colleagues addressed the adverse effects of in-ear listening devices. They said that in-ear devices affect the natural acoustics of an open ear system.

"Audio speakers, when inserted and sealed in the human ear, can produce large oscillations in pressure within the ear canal, even when the speakers are operated at what would normally be considered modest input power. These pressures differ from the acoustical sound pressures as they normally exist in open air or in larger confined volumes."

The oscillating static pressures in the confined space of the ear canal cause an increase in sound pressure, which in turn activates a defense mechanism called the stapedius reflex (also known as the acoustic reflex). Ironically, the reflex dampens the incoming loud sound, which in turn causes the listener to turn the volume even higher, thus further increasing pressure in the ear.

The oscillating static pressures also strain the tympanic membrane (the ear drum). To make matters worse, there is an occlusion effect that causes a person's voice to boom in his or her own head. If you want to know what that might feel like, cover both of your ears and talk. Now, multiply that many times over and you have what musicians and hearing-aid users experience.

Ambrose's proposed solution is a synthetic membrane placed over a vent. The membrane is made of expanded polytetrafluoroethylene, Ambrose said, a material popularized as Teflon and Gore-Tex.

The membrane is designed to circumvent the pressure in the closed ear canal. It is made of flexible material that can change formation to help relieve the pressure. When the researchers tested the membrane within an ear bud, they observed decreased levels of static pressure oscillations, which in turn reduced sound pressure, therefore helping to avoid the activation of the acoustic reflex. Over-excursions of the ear drum were also reduced.

Building on this idea, Ambrose and his colleagues created a separate corrective device, the Ambrose Diaphonic Ear Lens. The ear lens is a seal that is inflated using the Asius Diaphonic Pump, another innovation by Ambrose and his colleagues. The inflatable seal expands to fit any ear and helps alleviate pressure on the ear canal. The pump harnesses power from the motion of the in-ear device itself, whether an iPod or a hearing aid.

A second paper presented by Ambrose and his colleagues at the meeting, explains how the diaphonic pump manipulates a small orifice known as a synthetic jet. A normal synthetic jet moves fluid, such as air, to exert force, and is normally an open system. The fluids traveling between an energy source and a standard synthetic jet are not isolated, preventing the static pressure buildup necessary to power the pump.

To counter this, the researchers created a closed system. It encloses the opening from which the jet pumps its fluid, in this case air. "This closed system contains fluid pumped by the device and also contains the static pressure which the device generates," the paper said.

The resulting sequence is as follows: Music turns on, pressure from sound volume stimulates the pump, fluid is pumped through the synthetic jet and the seal inflates comfortably in the ear. There is no risk of over-inflation or  of the pump being thrown off by quick volume adjustments.

The ear lens and the pump work together to provide a more comfortable feel than many standard hearing aids provide. The original devices Ambrose invented, which are still in use, seal both ears, decrease space and increase the amount of pressure in the ear canal. However, the pressure in the ear canal constricts the ear drum's movement, while the speaker increases strain on the ear drum, activates the acoustic reflex, and encourages the occlusion effect. The Ambrose Diaphonic Ear Lens, which functions with the aid of the Diaphonic Pump, removes these negatives as well as the original problem, listener fatigue.

For Ambrose, this innovation has been a long time coming. He gives a lot of credit to Stevie Wonder for helping guide development of the initial innovation, and the influence Wonder has had on Ambrose so many years later in the quest for the perfect sound.

"His perception, music-wise and fidelity-wise, guided me for the first five years. He's the guy that made this happen," said Ambrose.

Related Awards
#1046625 SBIR Phase I: Diaphonic Valve on a Chip, Harvesting Energy From Audio to Couple Communications Into the Ear