Finding answers around the sun 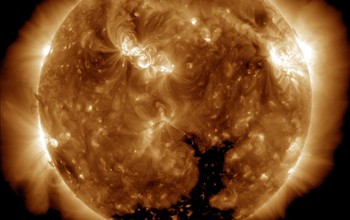 Other researchers likely will now work to replicate these results elsewhere in the corona.

Astronomers have collectively puzzled over two working theories for a conundrum involving the sun that have been discussed in Astronomy 101 classes for decades: Why is the sun's corona (the atmosphere beyond the sun) so hot? And the sun's core is a searing 15 million Kelvins, but by the time that heat reaches the sun's surface, it cools off to a mere 6,000 degrees, only to again heat up to more than a million degrees in the corona.

Two National Science Foundation (NSF)-funded researchers at Columbia University recently published what they believe is the solution, and it has to do with magnetic waves known as Alfven waves. The researchers present their findings today at the Hinode 7 science meeting in Japan.

Michael Hahn and Daniel Wolf Savin analyzed data from the Extreme Ultraviolet Imaging Spectrometer on the Japanese satellite Hinode over a polar coronal hole and found that, much like the vibrations of a plucked guitar string, the solar magnetic field lines also pulsate, and in doing so transfer energy from below the sun's surface into the corona. Hinode's spectrometer captured the waves penetrating the upper solar atmosphere.

"This is a fundamentally important finding," said Ilia Roussev, NSF program director for solar terrestrial research. "This issue is the holy grail of solar physics. If this allows us to better understand the mechanics, then it has tremendous consequences."

The coronal heating problem has been debated for 70 years with researchers essentially falling into two camps: One involving the Alfven waves and the other attributing the heating "problem" to magnetic field loops that stretch across the solar surface with the potential to "snap" and release energy.

The important key to Hahn and Savin's findings comes from Hinode satellite observations. The team has been studying Hinode data since 2009, with funding since 2011 from the NSF Solar, Heliospheric and INterplanetary Environment (SHINE) program.

"This is the big, unanswered question in solar physics, and nearly everyone in the field is somehow working on trying to solve it," Savin said. "We really had no idea where the research would lead us, but we were hoping to at least be able to add another piece to the puzzle. We did not expect it to be such a big piece."

In fact, technology had to catch up to theory to make this happen. The Hinode satellite, a Japanese mission with the Extreme Ultraviolet Imaging Spectrometer developed in collaboration between Japan, the United Kingdom and the United States, offered unique, previously unattainable observations.

"Until that time, we could only see the sun in white light; we didn't have UV observations. But, now we do," Roussev noted. With the UV capability, researchers can glean information on chemical makeup and physical conditions near the sun's surface that until the mid-1990s could not be observed. Hinode has been studying the sun since 2006.

"Some in the community have responded enthusiastically to our findings; others more cautiously, but that is to be expected," Savin said. "Others, including us, have pointed out that there may not be just one solution to the problem as there are different structures on the sun. Our work is relevant for coronal holes, which are the source of the fast solar wind. A different mechanism or mechanisms may be operating in the quiet sun."

The "in's and out's" of Earth's atmosphere

While the sun is almost 93 million miles from Earth, the electrons and protons from the sun move toward Earth via a wind of particles. This solar wind has impacts on the Earth's atmosphere in locations where satellites provide important imagery of the planet and allow technology like GPS and cell phones to operate.

"Ultimately, this kind of research does provide new perspective on space weather, which is known to affect the Earth" said Hahn, who was awarded a 2012 Blavatnik Award for Young Scientists by the New York Academy of Sciences for his work on the coronal heating problem. "Understanding these fundamental processes improves our understanding of not just the solar corona, but also of space weather."

Specifically, the high temperature of the sun's corona causes it to emit X-rays that can affect the conditions of Earth's atmosphere where satellites roam.

"The sun is the biggest X-ray machine in the solar system," Roussev explained. "The upper layers of Earth's atmosphere absorb those X-rays, but what they do is heat that upper atmosphere. It expands almost like the Earth breathing in and out. This has a direct impact on the lifetime of satellites. The more the atmosphere expands, the slower the satellites move. That shortens their lifetime as they slow to a point where they re-enter the atmosphere."

The interesting thing about potentially solving a puzzle like this one is that the solution raises more questions.

"What causes Alfven waves to be damped at such surprisingly low heights in the corona?" Savin asked, who is now proposing a series of experiments in plasma physics to simulate conditions in a coronal hole and explore possible mechanisms that would cause the waves to lose their energy. "We are also analyzing Hinode observations of other solar structures in the corona to see what role waves play in heating those structures."

Other researchers will likely explore replication, especially involving observations elsewhere in the corona, rather than just polar coronal holes.

"People have been claiming to solve the coronal heating problem for decades," Hahn said. "We are reasonably confident in our results and wait now for others to reproduce our findings."