How effective are white roofs, green roofs, and other urban heat-reducing technologies? 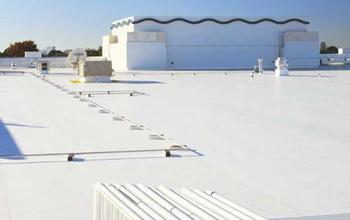 How effective are white roofs in cities? Scientists are finding new and surprising answers.

The following is part three in a series on the National Science Foundation's Water, Sustainability and Climate (WSC) Program. Parts one, two, four and five in this series are available on the NSF website.

Punxsutawney Phil's Groundhog Day prediction may have called for six more weeks of winter, but the first day of spring is now around the corner.

After a long season of snow and ice across the U.S. and around the world, warmer weather will likely be greeted with open arms.

In a hotter world, however, the bloom may quickly be off the rose.

When we think about the most sizzling locations on the planet, we often picture black-sand deserts. Indeed, research shows that the highest temperatures on Earth are in such dry, treeless and dark-colored places.

The description could fit cities just as well.

With hotter summers perhaps as big a threat as colder winters to the lives of humans and other species, scientists are studying ways of mitigating climate change in urban areas.

They're throwing icy water--metaphorically if not literally--on what's called urban heat islands: Cities with a patchwork of black surfaces. The researchers are starting where the sun first burns: rooftops.

The realities of a changing climate

"Life in a warming world will require human ingenuity to adapt to the new realities," says Matei Georgescu, a sustainability scientist at Arizona State University's School of Geographical Sciences and Urban Planning.

"Greenhouse gas-induced warming and the expansion of the megalopolis are significant drivers of our warming planet," says Georgescu. "We need to find adaptation technologies that will help us acclimate."

How well some of these adaptation technologies, including so-called "cool roofs"--white roofs, green (or garden-planted) roofs and hybrids--work, and how they perform in various locations "has been a big unknown," says Georgescu.

Through a National Science Foundation (NSF) Water Sustainability and Climate (WSC) grant, he and colleagues are looking at the effectiveness of common adaptation technologies to reduce warming caused by urban expansion.

The WSC program is part of NSF's Science, Engineering and Education for Sustainability initiative.

"This research underscores that what we build has effects well beyond where we build it," says Tom Torgersen, a program director in NSF's Directorate for Geosciences and lead for the WSC program. "New solutions are clearly needed in a world of warming temperatures and larger cities."

Conversion from natural to urbanized lands "has consequences for regional climate and for the many inhabitants living within what we call 'the built environment,'" Georgescu says.

All cities not alike

Results of Georgescu's research, published in a recent paper in the journal Proceedings of the National Academy of Sciences (PNAS), show that while urban adaptation technologies like cool roofs can counteract that increase, their effects change with the season--and depend on where they're located.

Georgescu, along with Philip Morefield, Britta Bierwagen and Christopher Weaver of the U.S. Environmental Protection Agency, studied how these technologies fare in different places across the United States.

"We looked at each adaptation strategy and its effects through the seasons," says Georgescu, "and quantified its consequences for rainfall, climate and energy demand.

"We found that geography matters."

What works in California's Central Valley, such as cool roofs, doesn't necessarily work in other places in the country, like Florida.

"The effects of cool roofs extend beyond surface temperatures to rainfall and energy demand," says Georgescu. "There are trade-offs that are often unaccounted for."

In the search for ways to reflect incoming solar radiation and decrease energy demand during summer months, painting roofs white has been touted as an easy answer.

In fact, these cool roofs are effective in certain areas, says Georgescu. "But in more northern locations, this strategy in winter further cools the environment," he says. "That leads to a need for additional heat to keep buildings warm."

Is the story any different for green roofs?

While green roofs don't cool the environment as much during the summer, they also don't nullify energy savings gained during warm months by creating new demands during colder months.

In Florida, says Georgescu, there's yet another effect. "Our simulations indicate that white roofs in Florida result in a significant reduction in precipitation," he says.

"They lead to a decrease in rainfall by a considerable amount each day--almost 50 percent. That has implications for water availability, stream flow and ecosystems."

In Florida, white roofs, the team found, may not be the best way of overcoming the urban heat island effect. "Floridians may want to choose another technology," says Georgescu.

The scientists suggest that planning and design choices--and where they will be implemented--should be considered in efforts to mitigate climate change and cities' growth.

"There are no one-size-fits-all solutions."