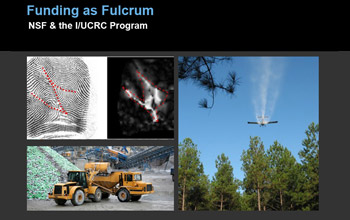 Archimedes didn't invent the lever, but he explained the principles that underlie the tool. Likewise, the National Science Foundation (NSF) didn't originate the idea of using funding as a fulcrum, but with the Industry and University Cooperative Research (I/UCRC) program, the agency has discovered an effective model for financing emerging research areas at a relatively low cost.

Over the course of more than 40 years, by making small investments in dozens of I/UCRC centers, NSF has helped to kick off thousands of research projects with real-world applications.

From projects to improve hospital operations to efforts to develop robots for search-and-rescue operation to technologies to identify fraudulent fingerprints, I/UCRC supports a dizzying array of research agendas that are important to fundamental science and to industry and government at-large.

The accompanying slideshow provides examples of I/UCRC-supported centers around the world.

Identifying breakdowns before they occur

At the annual meeting of I/UCRC centers in January 2014, NSF honored the Center for Intelligent Maintenance Systems (IMS), based at the University of Cincinnati, with the Alexander Schwarzkopf Prize for Technical Innovation for "its exemplary research contribution to technology innovation and its positive impact on technology, industry, and to society as a whole." (The Alexander Schwarzkopf Prize is awarded annually in honor of the I/UCRC founder, longtime manager and current honorary leader.)

IMS is often put forward as a model I/UCRC center, having garnered more than $855 million in savings for industry since it launched in 2001, largely based on the vision and leadership of Jay Lee, the center director and founder. Since its inception, IMS has conducted over 100 projects in partnership with over 100 international organizations.

The 2012 NSF I/UCRC Economic Impact Study Report named IMS the number one ranked project in terms of its return on investment. For every dollar that NSF gave to the center, IMS was able to leverage industry support to provide a $270 return.

IMS's mission is to create maintenance systems that allow equipment to perform with near-zero breakdowns. Their goal is to transform the traditional "fail and fix" maintenance practices to "predict and prevent" ones by focusing on frontier technologies in embedded and remote monitoring, prognostics, and intelligent-decision support tools.

"We're talking about self-diagnostics, self-monitoring the health of a product so it tells people ‘my behavior is changing. I'm degrading. I need to be fixed early.'" Lee said. "That's the vision."

Over the years, IMS has helped industry leaders like GE, Proctor and Gamble and Toyota save millions by identifying problems in machinery before it breaks. A major consumer manufacturing company reportedly saved $415 million per year worldwide by incorporating technologies and tools developed at IMS.

"We create a lot of new knowledge that people don't think about and then often turn them into software that we develop and trademark, like Watchdog Agent," Lee said. "Everyone understands a watchdog. When the dog barks, it means a stranger has come to the house. Well, we created this software that you can put on the server or the network and it can bark if something goes wrong."

IMS is not unique in its longevity and success. Rather, it is characteristic of the kind of disruptive, translational research the I/UCRC program champions.

"I/UCRC constitutes a network of over 3,000 people, comprising a vibrant research innovation ecosystem that is really connecting industry with academia," said Larry Hornak, a program officer at NSF.

The program currently supports 67 centers in 42 states and four countries (Belgium, Germany, Russia, and India). In 2013, I/UCRCs were responsible for more than 1,400 publications, and they spun off half a dozen start-up companies.

"This is the most efficient use of federal research money that we've ever found," said Christopher Miles, Biometrics Program manager at the Department of Homeland Security (DHS) and a member of the I/UCRC-funded Center for Identity Technology Research (CITeR) where a $40,000 membership by DHS leverages over $1 million in funding each year.

Among the research topics addressed by CITeR: an automated screening system to assess the credibility of airport travelers, and new methods to detect when individuals are using fake or altered fingerprints in biometric devices.

"We're also working with industry partners in a way that doesn't exist anywhere else," Miles said.

NSF provides annual grants of $60,000 and $90,000 dollars to the 67 centers, depending on the age and maturity of the center. These funds are matched many times over by investments from industry, other government agencies and the participating universities themselves. On average, each center has 18 dues-paying members. These dues multiply the funding for research and educational efforts that are of interest to all parties.

In 2013, NSF invested $17.8 million in the program - $8 million from the CISE directorate and $9.8 million contributed by the Engineering directorate. According to the most recent NSF economic studies, every dollar invested by the agency is supplemented by $8 from center members.

In addition to supporting existing research centers, the awards helped fund the creation of 11 new centers, among them the Cyber-Physical Systems for the Hospital Operating Room project; the Broadband Wireless Access & Applications Center; the Spatiotemporal Innovation Center; and the Wheat Genetics Resource Center, investigating one of the U.S.'s most important crops.

At the annual meeting of I/UCRCs in Washington, D.C. in January, program leaders and participants spoke about the significance of the program as a source of great ideas and as a model for multi-institutional collaborations.

"Our goal with the program is to determine effective ways of stimulating non-federal investment in R&D while improving the application of R&D results," Hornak said.

But the program isn't only about research and development activities. I/UCRC center research typically engenders three outcomes that are of interest to industry: ideas, products and people.

"There may be results that could be very interesting or useful to industry, or tools like software that we develop that are useful and that companies can take and try, or students that they can hire that will eventually become their workforce," Lee said. "It's a three-legged stool of value creation."

In his remarks at the Annual Meeting, Hornak cited the educational component as a significant aspect of the program.

"Students are the heart of our I/UCRCs," he said. "They're the true lasting legacy of our centers and they're the cornerstone of the program. We enhance intellectual capacity through the integration of research and education."

Byron Gillespie, Intel's engineering director of performance measurement and analysis and chair of the internal advisory board for the Center for Embedded Systems, echoed this sentiment.

80 to 90 percent of each center's funding supports students at all levels, from undergraduates to post-doctoral researchers, and these opportunities often lead to jobs. In the case of IMS, member companies recruited 85 percent of students who worked on I/UCRC research projects over the years.

Back at the annual meeting, researchers shared best practices for running a center, as well as examples of impactful research. The meeting was accompanied by the release of a compendium of research results from the past year that had been identified by industry as those with the greatest transformative potential and economic value.

Based on her experience running the I/UCRC program, Rita Rodriguez, an NSF program officer from CISE, exhorted participants to consider outside-the-box approaches to society's most pressing problems.

"Think big, think crazy," she said, "for tomorrow the insanity may become gold."

An I/UCRC compendium of industry-nominated highlights is available online.