The beautiful brain cells you don't know about

Hint: They're not neurons 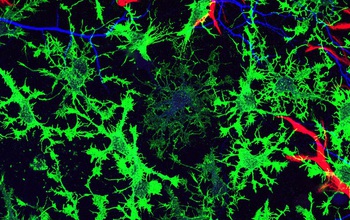 Glia in a mouse brain.

The number of nerve cells in the human brain sounds impressive: 100 billion. And it is.

But neurons may make up as little as 15 percent of cells in the brain. The other cells are called glial cells, or glia.

Glia are the rising stars of the neuroscience universe. Once delegated to simply a supporting role for neurons, these cells are now thought to play an important part in early brain development, learning and memory.

A 2013 workshop funded by the National Science Foundation (NSF) enabled researchers who study learning and memory to get together (many for the first time) and reconsider glia's function.

"It was paradigm-shifting," said R. Douglas Fields, a neurobiologist at the National Institutes of Health and meeting organizer. "Everyone left enthused about the enormous potential for understanding brain function, especially learning and memory by studying how all the cells in the brain work together, rather than focusing exclusively on neurons."

In fact, Fields and other brain researchers who specialize in glia have since called for a greater focus on non-neuronal cells as part of the BRAIN Initiative, a collaborative research project announced by the Obama administration in April 2013.

When you learn something, how to catch a ball or use an equation, information is transmitted along the spindly arms of neurons via electrical signals. At the same time, glia called oligodendrocytes work to insulate these particular arms with a fatty substance called myelin so the information flows more efficiently.

Some studies show that glial cells known as astrocytes may have an even more active role in learning. Astrocytes may release chemicals that strengthen newly formed connections between neurons, making it more likely you'll be able to remember a new face, or the name of your co-worker's beloved golden retriever.

Understanding how we learn requires that scientists and engineers take a holistic approach to brain research.

NSF-funded research centers such as the Center of Excellence for Learning in Education, Science and Technology and the Temporal Dynamics of Learning Center integrate experimentation, modeling and technical application to help us understand what's really going on inside the brain. And to use that knowledge to educate students and to build intelligent technologies.

Related Awards
#1005256 REU Site: The Temporal Dynamics of Learning
#0835976 CELEST: A Center of Excellence for Learning in Education, Science, and Technology
#1258562 Glial Biology of Learning and Cognition, to be held in Arlington, Virginia, February, 2013