Harnessing the power of viruses to improve wastewater treatment 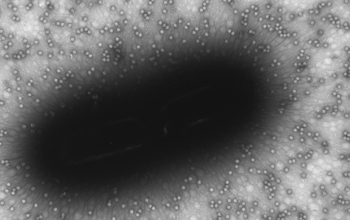 Bacteria infected by a virus.

Just as certain viruses infect humans, there also are viruses that infect only bacteria. Unlike human viruses, however, which are non-discriminatory and will infect any number of different people, these viruses, known as bacteriophages, are "host-specific,'' meaning each will attack only one particular bacteria.

"Wherever bacteria exist, there are bacteriophages,'' says Ramesh Goel, an associate professor of civil and environmental engineering at the University of Utah. "If we go to any wetland, or streams or wastewater treatment process, bacteria are there, and so are bacteriophages."

Goel believes he can put this phenomenon to good use.

The National Science Foundation (NSF)-funded scientist, who studies the microbial ecology of natural and engineered systems, particularly those that use microbes to remove pollutants and other contaminants from waste water, is trying to harness the power of bacteriophages to rid treated wastewater of problematic bacteria that cause operational problems during treatment.

The use of bacteria in wastewater treatment has become increasingly popular in recent years, but it is not without challenges. Certain bacteria involved in the process, for example, called filamentous bacteria, continue to float on the surface of the water when the treatment is complete, rather than settle on the bottom where they can be removed through a simple physical process known as gravity settling.

"On the one hand, we use the bacteria to treat the water, but some are not cooperating and create problems," Goel says. "We end up having bacteria in our final, treated water."

The problem-causing bacteria are nontoxic to humans, making them harmless, but can cause problems if the treated water is discharged into streams or rivers, where they will consume oxygen and pose a threat to aquatic life.

"The danger is in having them escape with the treated water,'' he says, adding that to otherwise kill the bacteria "requires a lot of chlorine,'' as well as other challenges.

Goel is developing a system to isolate and replicate the viruses that infect several filamentous bacteria known to cause settling problems in biological wastewater treatment processes.

In a related project, Goel also is trying to use phages to solve the problem of biofilm formation in wastewater treatment systems that use membrane filtering, rather than gravity settling. During this process, which sends treated wastewater flowing through a membrane to separate it from bacteria, the bacteria often form biofilms on the surface of the membranes, which are substances that resemble slime, a problem known as biofouling. Goel hopes to use bacteriophages to eliminate biofilms, thus preventing biofouling, either by direct application of phages or by using intermediate chemicals produced by phages that are capable of degrading biofilm.

If successful in these water treatments, the use of bacteriophages "will have tremendous impact, unimaginable impact, since these are worldwide problems," he says.

Goel thinks there may be additional future practical applications for bacteriophages separate from wastewater treatment. He sees potential for them in the health field, for example, in drug delivery or in using them to treat external bacterial infections, such as on skin, or on medical devices, such as catheters, "which sometimes get biofilms," he says. "You end up using expensive chemicals. Could we use phages to remove these biofilms?

"Can we use phages to deliver drugs?" he adds. "There may be some antibiotics we want to deliver that aren't reaching the person--the phages will not only kill that particular bacteria, but deliver the drug. These are all new ideas we are exploring."

Goel is conducting this research under an NSF Faculty Early Career Development (CAREER) award, which he received in 2011. The award supports junior faculty who exemplify the role of teacher-scholars through outstanding research, excellent education, and the integration of education and research within the context of the mission of their organization.

As part of the grant's educational component, Goel is hosting a number of local K-12 students in his lab, exposing them to the field of wastewater engineering and microbiology. He also is working with three women undergraduates in his lab; one of them, from the Computer Science Department, is creating computer animations for public outreach.

"The whole idea is to use animations to create a virtual lab, something that will go beyond our borders and that we can share with other countries," he says. "The animations will show how phages infect bacteria, and we think they will really help students better understand these concepts."