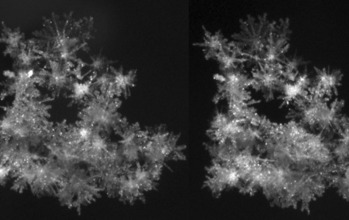 Using a two-camera system, the researchers can capture images in stereo.

The technology behind the camera that revealed the intricate, imperfect beauty of snowflakes can now expose their potential danger.

About three years ago, a new high-speed camera system captured freefalling ice crystals so well it might as well be yelling "freeze!". Developed at the University of Utah with support from the National Science Foundation (NSF), the system arose from scientific curiosity about snow.

Now, a less expensive, hardier version is headed to the marketplace to help improve safety.

This next-generation model has the same incredible capability, but is designed for use by departments of transportation to anticipate road conditions.

"Right now the problem in the transportation safety sector is to understand exactly what's falling out of the sky," says engineer Cale Fallgatter, who has an award from the NSF Small Business Technology Transfer program to commercialize the system. "Our goal was to come up with a game-changing instrument based on new technology to compete with what is currently out there."

Transportation departments nationwide use camera and sensor systems to collect and analyze data from weather stations to gauge road conditions.

There may be 50 to 150 of these systems, called road weather information system stations, in any given state. They help determine snow plow routes and preventative salting decisions.

"There are a lot of weather detection sensors that differentiate between rain and snow," says Ralph Patterson, a consultant meteorologist in Utah. "But you need pretty sophisticated visibility sensors and/or present weather detectors to get snowfall rates. With this camera you get the resolution of snow crystal type and the density."

The types of precipitation falling have serious implications for traffic safety, as anyone who has driven in sleet rather than flurries can attest.

But instruments in use now often don't provide enough detail for authorities to get a firm grasp on conditions, especially when temperatures hover near the freezing point.

The new system promises to send the snow diagnoses needed.

Using fundamental precipitation research from atmospheric scientist Timothy Garrett, who developed the original multi-angle snowflake camera with Fallgatter, the technology can resolve falling particles down to the diameter of a human hair and also measure the speed at which they fall. The first images produced by the team revealed the surprising diversity of snowflakes.

"Personally, it's really exciting, because not only did we build something that will reach a wider market, but the instrument is a big advance scientifically," Garrett says. "The trick is to develop existing technology and sell it for one-tenth the price."

From the lab to the roadside

For a roadside application, Fallgatter had to engineer a new prototype that would preserve the original camera system's amazing functionality while making it affordable for state transportation departments.

He did this in part by using off-the-shelf products instead of custom-made pieces. The new camera system, called the present weather imager, has 1.3 megapixels, is industrial grade and is priced to compete.

"It's the same high-level technology, but designed for roadside deployment," Fallgatter says.

It also has a revamped lighting system. While the original version used motion-activated LED lighting, the new prototype has a xenon-based lighting system with an infrared filter, which doesn't interfere with people's vision on roads at night.

The new imager includes a built-in computer that analyzes each picture and classifies the precipitation.

The researchers plan to include an option for either a single camera or two-camera system, the latter of which would produce 3-D images, and give users an even more comprehensive view of each flake.

"Everything is falling into place," Garrett says.