"Treetop Barbie" is among the bold, inventive tools developed by researcher to reach varied audiences 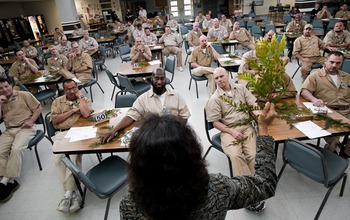 When most people think of prominent women in science, Barbie doesn't usually cross their minds. This is hardly surprising since Barbie has long been known for primping rather than for publishing. But the Barbie doll--one of the most popular dolls ever produced--remains an important role model for the behavior and appearance of young girls all over the world.

Barbie goes up a tree

That's why Nalini Nadkarni, a canopy ecologist at the University of Utah, wanted to help reinvent Barbie as a symbol of strength, action and academic interests. So Nadkarni, who is nicknamed the "Queen of Forest Canopy Research," created an alternative version of Barbie: "Treetop Barbie," an (evidently) serious-minded canopy climbing researcher.

Back in 2000, when Nadkarni was on the faculty of The Evergreen State College in Olympia, Wash., she started producing Treetop Barbie; Nadkarni organized a corps of local seamstresses to manufacture for the standard Barbie sporty field clothes styled after those typically worn by canopy-climbing researchers--fully accessorized with a scientific notebook, safety helmet and crossbow for shooting climbing ropes up into the trees. In addition, Treetop Barbie was packaged with a 12-page booklet about canopy wildlife and plants.

Nadkarni distributed the canopy-correct Treetop Barbie from the website of the International Canopy Network, a nonprofit group she co-created in 1996.

What was the response to Treetop Barbie? Nadkarni explains, "The multiple responses to my creating Treetop Barbie were astonishing--from outrage that an ecologist would promote an icon of consumerism to positive affirmations that it was about time scientists recognized the power of a pop icon to promote science and women, to the upturned face of a 6-year-old girl who simply said 'I like to climb trees, too.' They taught me that connecting science with values that are not my own--but that resonate with others--is an effective pathway to public engagement of science."

In 2011, Nadkarni joined the University of Utah's faculty. When she moved to Salt Lake City for the position, her corps of Olympia-based seamstresses dissolved. Consequently, Treetop Barbie is currently on a hiatus (or research sabbatical) that will end as soon as Nadkarni can recruit a new corps of volunteer seamstresses to produce field clothing for Treetop Barbie.

Nadkarni has led many other bold, creative communication and research programs: For example, she:

Nadkarni says, "Although it is often more comfortable and convenient for scientists to communicate with people who share their own values and vocabulary, overcoming the challenge of engaging with non-traditional public audiences--those who may never visit a museum or watch a nature documentary film--can have synergistic results. Transmitting knowledge, changing attitudes and allowing novel insights to emerge can flow in both directions."

In 2010, Nadkarni was honored to receive National Science Board Public Service Award for her many significant contributions to public understanding of science. In addition, her work has been featured in many popular magazines and television documentaries, including CNN's "The Next List" and "Heroes of the High Frontiers," an Emmy-winning National Geographic film.

The author of 110 scientific papers, Nadkarni is currently researching how so called "relict" trees from forests that have been converted to pasture may help maintain biodiversity and ecosystem function. As part of this research, Nadkarni is working with a team of ecologists, geneticists and traffic engineers to document, model and visualize the movement of animals through various types of habitats in Monteverde, Costa Rica. Nadkarni hopes that insights from this research may help promote the preservation of tees by land managers and farmers in landscapes that have been disturbed by human activities.

Looking back on the body of work she has generated so far as an NSF-supported scientist, Nadkarni says that her contributions to augmenting the scientific record are as important as her work engaging public audiences that are scientifically under-served. She has learned that creating projects involving the "strange bedfellows of science, religion, inmates and performance art can be surprisingly synergistic."