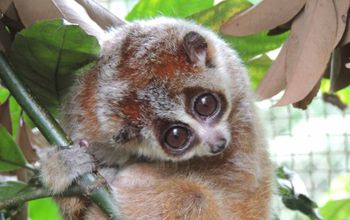 A pygmy slow loris clings to a branch at rescue center in Vietnam.

In the forest canopies of Vietnam lives a cryptic creature called the slow loris. It's steady, solitary and downright adorable, with tiny, fuzzy round ears and the impossibly large eyes common to nocturnal animals.

This adorableness has made the slow loris a darling of the illegal exotic pet trade. Wildlife trafficking--along with hunting and habitat loss--has pushed loris populations into vulnerable territory. That's why at this time of year in the jungles of Vietnam, you'll find scientists wearing big, red headlamps designed for hunting deer walking methodically in straight lines, their heads slowly turning left and right. The scientists are hunting, in a manner of speaking, for the loris.

"We want to understand the drivers, the patterns of scale, of the wildlife trade in lorises," says Mary E. Blair, assistant director for research and strategic planning at the Center for Biodiversity and Conservation at the American Museum of Natural History (AMNH). She's part of that team of scientists working on a project studying the lorises and the people who traffic in them. It's a unique, interdisciplinary approach: Blair's team includes biologists, economists and anthropologists from the United States and Vietnam. The U.S. side of the research is funded by the National Science Foundation (NSF).

"All conservation problems are really complex," Blair says. "A solely species-based approach to conservation is not going to cut it anymore."

The fourth-largest black market in the world, wildlife trafficking undermines biodiversity and all the environmental and economic benefits it provides. It also spreads infectious disease and threatens global security. Illegal wildlife trade networks often overlap with networks used by drug and human traffickers, and profits from the wildlife trade can fuel criminal organizations worldwide.

Trafficking threatens the survival of iconic animals--tigers and elephants, for example--and lesser-known species, like Siamese crocodiles and tree shrews. Slow lorises fit into that latter category.

Blair began studying the lorises after she and her Vietnamese counterparts realized the animal was neglected, research-wise. Lorises are rare, nocturnal and live in dense tree tangles--not exactly the easiest animal to study.

"We were interested for conservation science reasons," Blair says. "We need to know how many species there are, how many individuals there are left. These basic data are missing for these animals, especially in Vietnam."

Yet very quickly, it became clear that wildlife trafficking was a severe threat to their survival. Thanks to NSF funding, Blair's research shifted to both collecting biological data on slow lorises and conducting a socioeconomic analysis of individuals and communities involved in the animal's hunting and trafficking in Vietnam.

Layering these datasets together reveals patterns that help answer key questions: Where are the hotspots? What's driving the trade? This information, in turn, can help guide policies that combat wildlife trafficking.

"It's a perfect example of how to address complicated conservation issues," says Samuel Scheiner, a program officer in NSF's Biological Science Directorate.

Last September, Blair and Minh Le, an environmental science lecturer and research associate at Vietnam's Center for Natural Resources and Environmental Studies, took the project a step further. They received funding through Partnerships for Enhanced Engagement in Research (PEER), a collaboration between NSF and the U.S. Agency for International Development.

The PEER award expands the research to additional threatened species (turtles and the muntjac, a small Asian deer) and supports the creation of a DNA database, which can be used to identify the source of confiscated animals. Say a slow loris is caught by law enforcement in Hanoi. Police could use the publicly available, online database to match the loris' DNA and trace it back to its home habitat in Phnom Penh or Ho Chi Minh City.

The data Blair, Le and the team have collected so far suggests that even though wildlife trafficking in lorises has increased overall, it has decreased locally. "There's a very big separation between what's happening at a local scale and a larger, more elite scale," Blair says. "There are two very different markets."

This has implications for how countries fight trafficking. Most enforcement occurs at a local level; the people arrested are the ones actually going into the forest and hunting the animals. But the NSF-funded data suggests that to be truly effective, enforcement has to happen at a larger level, and target the bigger black market players.

The U.S.-Vietnamese relationship recently marked a milestone: 20 years of diplomatic relations. The two countries signed a normalization agreement in 1995. Four years later, Eleanor Sterling was in the country, analyzing biodiversity and discovering new species along the way.

Through an NSF award, Sterling worked with scientists at the Missouri Botanical Garden, Vietnam National University and the country's Institute of Ecology and Biological Resources. They inventoried a variety of species, better defined habitat boundaries, and analyzed how communities of species differ across Vietnam's varying elevations. The team was also interested in how protected areas might affect local communities, and how they used environmental resources. The Vietnam government was interested in these data as a guide to refining the country's protected areas.

It was an interesting time and place for research. Sterling and her partners were some of the first Western scientists in Vietnam.

"It was a learning curve for all of us," she says. They had to learn different approaches to scientific methods, work out complicated travel logistics. Once, they set up a fax machine in a remote post office so Sterling could let the Museum know all was well.

Young Vietnamese scientists were included on every step of the project, a legacy Blair sees in her current fieldwork.

"Almost everywhere I go, I meet a Vietnamese conservationist who says 'I was part of your survey in 2001!' or 'I went to your workshop!'" Blair said. "It's so much easier for me to come in and start new partnerships and collaborations, because I have those partnerships behind me."

Le is a perfect example: He met Sterling during her fieldwork in Vietnam when he was an undergraduate. Le came to the U.S. for graduate school, studied at AMNH for his Ph.D., and is now a lead investigator on the PEER award.

Blair works to extend that legacy of cooperation. Her current NSF research includes mentoring Vietnamese students and exposing them to inter-disciplinary research.

Sterling's project wasn't explicitly focused on wildlife trafficking, though she began to see its effects as the field seasons wore on.

"We would drive and see these animals for sale along the roads," she said. "In boxes, in bottles, in taxidermies."

Today, trafficking is the primary threat to many species in Indochina. Vietnam is often a conduit for trafficking, shuttling animals to Cambodia, Laos and beyond. But the problem doesn't stop there.

"One of the biggest markets for wildlife trade is the United Sates," says Scheiner. "We as a country are actually responsible for driving a lot of this trade."

Wildlife trafficking--and conservation--is a complex problem that requires a comprehensive solution, Le says. One that weaves together insights from biology, economy and social sciences, and utilizes the strengths of scientists around the world.

"We need a collective effort," he says.