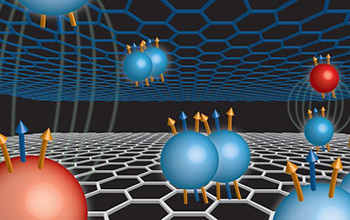 A new type of quasiparticle is discovered in graphene double-layer structure.

NSF-funded research by scientists at Brown and Columbia Universities has demonstrated the existence of previously unknown states of matter that arise in double-layer stacks of graphene, a two-dimensional nanomaterial. These new states, known as the fractional quantum Hall effect, arise from the complex interactions of electrons both within and across graphene layers.

"The findings show that stacking 2D materials together in close proximity generates entirely new physics," said Jia Li, a physicist at Brown University. "In terms of materials engineering, this work shows that these layered systems could be viable in creating new types of electronic devices that take advantage of these new quantum Hall states."

The research is published in the journal Nature Physics.

The Hall effect emerges when a magnetic field is applied to a conducting material in a direction perpendicular to a current flow. The magnetic field causes the current to deflect, creating a voltage in the transverse direction, called the Hall voltage.

"The full implications of this research are yet to be understood," said Germano Iannacchione, a program director in NSF's Division of Materials Research, which funded the project. "However, it's not hard at all to foresee significant advances based on these discoveries emerging in traditional technologies such as semiconductors and sensors."