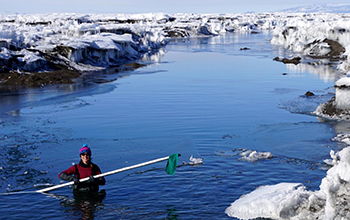 Co-author Alison Banwell wades through a meltwater pond in Antarctica.

Dangers to ancient Antarctic ice portend a future of rapidly rising seas, but a new study, partially funded by NSF, may relieve one nagging fear. Meltwater ponds fracturing the ice below them may not cause protracted chain reactions that unexpectedly collapse floating ice shelves.

A study published in Geophysical Research Letters and reported in a Georgia Tech press release modeled fracture chain reactions and water amounts necessary to repeat a rare, epic collapse such as the 2002 shattering of the iconic shelf "Larsen B."

Larsen B's disintegration was preceded by an atypical heatwave that riddled it with meltwater ponds, focusing researchers' attention on pond fracturing, also called hydrofracturing. They discovered that a melt pond hydrofracturing the ice shelf can prompt neighboring ponds to do the same. Concerns grew of possible extensive chain reactions, which the new study addressed.

"There is a speed limit in the study that shows that an ice shelf can't collapse ridiculously fast," said co-author Alison Banwell, a glaciology researcher at the University of Colorado Boulder. "However, if it becomes as covered in meltwater ponds very quickly as Larsen B was, it can collapse in a similar way."

Also funding the research was the Cooperative Institute for Research in Environmental Sciences at the University of Colorado Boulder.

"The evolution of surface and shallow subsurface meltwater across Antarctic ice shelves has important implications for their stability," said program director Paul Cutler in NSF's Office of Polar Programs. "It is vital to understand the causes of ice-shelf instability because ice shelves buttress against the discharge of inland ice and therefore influence ice-sheet contributions to sea level rise."