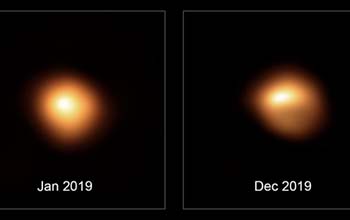 Observations of the star Betelgeuse taken in January and December 2019 that show the star dimming.

Late last year, news broke that the star Betelgeuse was fading significantly, ultimately dropping to around 40% of its usual brightness. The activity fueled popular speculation that the red supergiant would soon explode as a massive supernova.

But National Science Foundation-funded astronomers have more benign theories to explain the star's dimming behavior. Scientists at the University of Washington and Lowell Observatory believe they have support for one of them: Betelgeuse is dimming not because it's about to explode -- it's just dusty.

In a paper accepted by Astrophysical Journal Letters and published on the preprint site arXiv, Emily Levesque, a University of Washington astronomer, and Philip Massey, an astronomer at the Lowell Observatory, report that observations of Betelgeuse taken on February 14, 2020, at the Flagstaff, Arizona, observatory allowed them to calculate the average surface temperature of the star.

The new calculations lend support to the theory that Betelgeuse -- as many red supergiant stars are prone to do -- has likely sloughed off some material from its outer layers.

"We see this all the time in red supergiants, and it's a normal part of their life cycles," said Levesque. "Red supergiants will occasionally shed material from their surfaces, which will condense around the star as dust. As it cools and dissipates, the dust grains will absorb some of the light heading toward us and block our view."

It is still true: Astronomers expect Betelgeuse to explode as a supernova within the next 100,000 years when its core collapses. But the star's dimming, which began in October, wasn't necessarily a sign of an imminent supernova.

"These investigators have made an important discovery about the changes in Betelgeuse's brightness," said Glen Langston, a program director in NSF's Division of Astronomical Sciences. "They've made predictions that will be tested by observers using several NSF telescopes."