Researchers detect some of the earliest evidence for modern plate motion 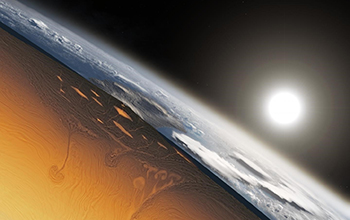 An enduring question in geology is when Earth's tectonic plates began pushing and pulling in a process that helped the planet evolve and shaped its continents into those that exist today. Some researchers theorize it happened around four billion years ago, while others think it was closer to one billion.

A National Science Foundation-funded team led by Harvard University researchers looked for clues in ancient rocks (older than 3 billion years) from Australia and South Africa. In a portion of the Pilbra Craton in Western Australia, one of the oldest pieces of Earth's crust, scientists found a latitudinal drift of about 2.5 centimeters a year and dated the motion to 3.2 billion years ago.

The findings, published in Science Advances, add to growing research that tectonic movement occurred on the early Earth.

"This is one piece of geologic evidence to extend the record of plate tectonics on Earth farther back in history," said Alec Brenner, one of the paper's lead authors. "Based on the evidence we found, it looks like plate tectonics is much more likely to have occurred on the early Earth. That argues for an Earth that looks a lot more similar to today's than a lot of people think."