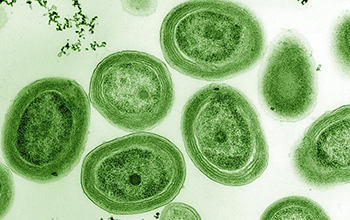 Beneath the ocean's surface, a virus is hijacking the metabolism of one of the most abundant organisms on Earth.

The marine cyanobacterium Prochlorococcus marinus is the dominant photosynthetic organism in the ocean. It produces up to 60% of the ocean's chlorophyll in regions such as the subtropical Pacific.

Scientists analyzed the role of ferredoxin proteins present when phages, viruses that infect and replicate within bacteria, alter the ability of Prochlorococcus marinus to store carbon and counter greenhouse gases from fossil fuel consumption.

The goal of the National Science Foundation-funded study, said biologist Ian Campbell of Rice University, was to explore the ways viruses interact with their hosts. In the process, the researchers discovered a phage that wrests control of electron flow in the host itself, rewiring the bacterial host's metabolism. Campbell is the lead author of the study's results, published in the Journal of Biological Chemistry.

"When this virus infects, it shuts down production of the bacteria's proteins and replaces them with its own variants," Campbell said. "It's comparable to putting a different operating system in a computer."

P. marinus resides primarily in the tropics and subtropics, where an estimated octillion use sunlight to produce oxygen and collectively store four gigatons of carbon annually. Some of the carbon provides critical feedstocks for other marine organisms.

But phages are not the bacteria's friends. The viruses become stronger by stealing energy the bacteria produce from light, reprogramming the victims' genomes to alter how they transfer electrons.

P. marinus and its carbon-storing mechanism are sensitive to temperature and thus bear watching as climate change warms the oceans and extends its range, Campbell said.

"A wider range of these organisms in the oceans could increase the total carbon stored," he said. "Alternatively, the viruses that infect these bacteria could alter carbon fixation and potentially prevent gigatons of carbon from being taken out of the air annually."