Documenting a colony of Adélie penguins 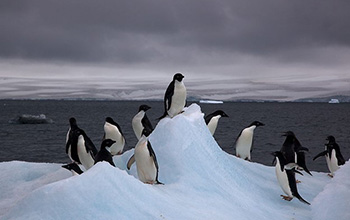 Scientist Mac Schwager at Stanford University, an aeronautics and astronautics researcher, learned that biologists were seeking a better way to image a large penguin colony in Antarctica. Schwager saw an opportunity to collaborate, given his work with swarms of autonomous flying robots.

That's how, more than 3 years later, Kunal Shah, a member of Schwager's team, found himself at Antarctica's McMurdo Station, ready for the first test flight of a new multi-drone imaging system that coordinates the flight of multiple autonomous drones.

"My hands were freezing," recalled Shah. "The drone batteries were too cold to work. The drone remote control was too cold. My phone was too cold and was flashing warnings. I thought, 'I'm down here for 2½ months and this is day one.'"

Undeterred, Shah and his colleagues quickly adapted their system. That adaptation is the subject of a paper published in Science Robotics. With U.S. National Science Foundation support, they produced detailed visual surveys of approximately 300,000 nesting pairs of Adélie penguins over a 2-square-kilometer area at Cape Crozier -- roughly equivalent to the size of the country of Monaco -- and another smaller colony of about 3,000 nesting pairs at Cape Royds.

Previous human-piloted drone surveys of the Cape Crozier colony took two days. Each round of the new survey, however, was completed in about two-and-a-half hours, thanks to a route planning algorithm that coordinated two to four autonomous drones and prioritized efficient coverage of the colony.

"Just moving all that equipment to a remote site and being able to prepare it, field it and deploy it with nothing other than tents and a small warming hut at your disposal, that's really phenomenal," said Schwager, who is the senior author of the paper but, to his disappointment, was not able to join the field team. "It really goes to show how practical autonomous robotic systems can be in remote environments."