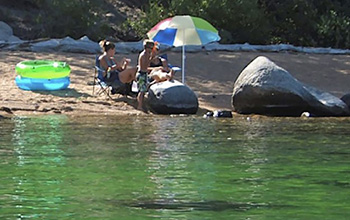 Many of the world’s most iconic clear lakes are degrading at an alarming rate -- shallow, nearshore lake bottoms are being carpeted by bright green fronds of slimy algae, especially during the summer. These filamentous algal blooms, known as FABs, need lots of light, so they occur at the same lake edges where people want to swim and play.

Researchers are unsure why FABs are suddenly showing up in remote mountain lakes -- as well as in some large lakes such as Lake Tahoe in the U.S., Lake Baikal in Russia and Lake Wakatipu in New Zealand -- but an international team of lake scientists is tackling the problem. In a recent paper, they explore how nutrient pollution, climate change, loss of aquatic animals that eat algae, and invasive species are contributing to the increased occurrence of green bottoms.

U.S. National Science Foundation-funded team member Sudeep Chandra of the University of Nevada, Reno said the researchers are working to develop a framework to guide the future understanding of FABs. The scientists are investigating the multiple local and global pressures that might contribute to the profusion of algae on lake bottoms.

"This project is figuring out how to predict these algal blooms, rather than just react to them," said Kendra McLauchlan, a program director in NSF’s Division of Environmental Biology.

Researcher Yvonne Vadeboncoeur of Wright State University is concerned that widespread use of pesticides or other stressors may be killing aquatic insects, allowing the algae to grow unchecked instead of being consumed by grazing insects that then provide critical food for fish. She also thinks the public could play a role in helping scientists document the occurrence of FABs.

"Scientists tend to study lakes from boats in the middle of the lake, but the pristine shorelines that are afflicted by these green bottoms are the same places that attract people for swimming, fishing and boating," Vadeboncoeur said. "We see the public playing a crucial future role in documenting the occurrence of this emerging change in lakes."