Understanding how plumes take shape above thunderstorms could help forecasters 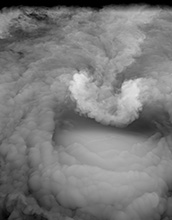 A 3D rendering of the simulation experiment of the side of the overshooting top of a supercell.

When a cloudy plume of ice and water vapor billows above the top of a severe thunderstorm, there is a good chance a violent tornado, high winds or hailstones bigger than golf balls will soon pelt the ground below.

A new Stanford University-led study funded by the U.S. National Science Foundation and published in Science reveals the physical mechanism for these plumes, which form above most of the world's most damaging tornadoes.

"To unravel the mystery of how tornadoes are generated, it is important to understand the flow structures inside supercells -- one type of tornado parent storm," said Chungu Lu, a program director in NSF's Division of Atmospheric and Geospace Sciences. "This research has demonstrated the possible link between the overshooting cloud structure on the top and the tornado generated below the cloud by using ultra-high resolution computer simulations corroborated with radar observations."

Research has shown that icy plumes are easy to spot in satellite imagery, often 30 minutes or more before severe weather reaches the ground. "The question is, why is this plume associated with the worst conditions, and how does it exist in the first place? That's the gap we are starting to fill," said atmospheric scientist Morgan O'Neill, lead author of the new study.

The research comes after supercell thunderstorms and tornadoes spun up among the remnants of Hurricane Ida as they barreled into the U.S. Northeast, compounding devastation wrought across the region by record-breaking rainfall and flash floods.

Understanding how and why plumes take shape above powerful thunderstorms could help forecasters recognize similar impending dangers and issue more accurate warnings without relying on Doppler radar systems, which can be knocked out by wind and hail -- and have blind spots even on good days. In many parts of the world, Doppler radar coverage is nonexistent.

"If there's going to be a terrible hurricane, we can see it from space. We can't see tornadoes because they're hidden below thunderstorm tops. We need to understand the tops better," said O'Neill.

The thunderstorms that spawn most tornadoes are supercells, a rare breed of storm with a rotating updraft that can hurtle skyward at speeds faster than 150 miles per hour with enough power to punch through the usual lid on Earth's troposphere, the lowest layer of the atmosphere.

In weaker thunderstorms, rising currents of moist air tend to flatten and spread out upon reaching this lid, called the tropopause, forming an anvil-shaped cloud. A supercell thunderstorm's intense updraft presses the tropopause upward into the next layer of the atmosphere, creating what scientists call an overshooting top. "It's like a fountain pushing up against the next layer of our atmosphere," O'Neill said.

About 75 percent of thunderstorms with these plumes produce large hail or tornadoes, says Leigh Orf of the University of Wisconsin-Madison, a co-author whose expertise includes modeling and simulating storms on supercomputers. The plumes’ appearance on satellite imagery can help guide severe weather forecasts.