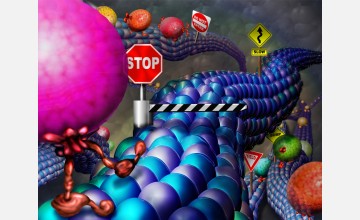 Researchers have identified a new group of enzymes that appear to control how cells direct internal traffic and regulate certain types of locomotion, according to a report in the May 12 online edition of the journal Science.

Complex cells—from single-celled fungi to those in humans—are equipped with a sophisticated transportation infrastructure.  Motor proteins haul molecular cargo to and from different locations inside cells by traveling along a network of protein fibers called microtubules. Enzymes inside cells frequently add or remove different molecules from the surfaces of microtubules. And although scientists have known of such modifications for many years, figuring out what these molecular tags do and how they are formed has been difficult—until now.

A team headed by Jacek Gaertig of the University of Georgia, Athens, and Bernard Eddé of the National Center for Scientific Research (CNRS) in France, has identified a group of enzymes responsible for attaching glutamic acid (an amino acid) tags to the sides of microtubules.  The enzymes—known as polyglutamylases—produce glutamic acid chains of varying length and branching patterns, which appear to act like cellular traffic signals, guiding molecular motors as they travel along microtubules.

Eddé's group purified a polyglutamylase complex from mice—a feat Gaertig described as a "biochemical tour de force." Then, Gaertig's group turned to Tetrahymena—a single-celled aquatic creature researchers commonly use in the laboratory—to figure out which parts of the enzymes generate the glutamic acid chains on microtubules and what the enzyme does inside cells.  The team determined that the enzymes target different locations in the organism where they tag specific sites on near-by microtubules.

One polyglutamylase, for example, acted on cilia—microtubule-rich appendages Tetrahymena uses as "oars" for swimming.  As molecular motors called dynein move along microtubules inside cilia, these oars bend and stroke, propelling the organism forward.  When the team coaxed the organism to over-modify microtubules by increasing levels of polyglutamylase enzymes, the cilia stopped moving.  Apparently, the extra glutamic-acid tags act like a stop sign for regulating dynein.

"The function of these glutamic acid chains have, until now, remained completely obscure," says Eve Barak, manager of the National Science Foundation program that funded Gaertig's work. "The findings are an important step for understanding how cells control intracellular traffic and locomotion."

Gaertig hopes these findings will help unravel other mysteries about intracellular traffic and locomotion such as how  motor proteins know which microtubule "highway" will take them to the proper destination and how fast to travel.

To read more, see the University of Georgia press release.