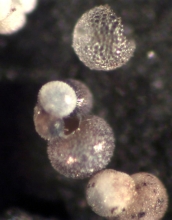 Sediment cores collected from the seafloor off Southern California suggest that plankton populations in the Northeastern Pacific have changed significantly since the early 1900s, and that the changes closely parallel a general warming trend starting at that time.

Writing in this week's issue of the journal Science, oceanographer David Field and his coauthors describe how subtropical and tropical species of small marine organisms called foraminifera (forams) seemed to become more abundant as ocean temperatures increased, while the foram species living in cooler waters seemed to become less abundant. Furthermore, the scientists say, the changes observed after the mid-1970s are unlike anything they have found in sediment evidence from the previous 1,400 years.

These dramatic conclusions are based on data gathered by Field, who currently works as a postdoctoral fellow at the Monterey Bay Aquarium Research Institute, during his graduate studies at the Scripps Institution of Oceanography at the University of California, San Diego. His collaborators in this study were Timothy Baumgartner and Vicente Ferreira-Bartrina of Centro de Investigación Científica y de Educación Superior de Ensenada, Mexico, and Christopher Charles and Mark Ohman of Scripps.

"This research provides a long-term context for many other studies of oceanographic and ecological conditions off the California coast," said Philip Taylor, director of the National Science Foundation (NSF)'s biological oceanography program, which funded the work. The study was conducted as part of NSF's Long-Term Ecological Research (LTER) program, which supports ecological research over long time periods in a variety of terrestrial and marine ecosystems. One possible conclusion of this research at the California Current Ecosystem LTER site, said Taylor, is that "human influences are pushing our environment beyond historical and natural variation."

The foraminifera that Field and his colleagues studied are small, amoeba-like organisms that live inside tiny shells called "tests," several of which might fit on the head of pin. Most forams live near the surface of the world's oceans, with different species living in ocean waters of different temperatures. When they die, however, their shells sink to the seafloor, often mixing with the sediment there to form distinct annual layers similar to growth rings in a tree. And in some areas those annual layers remain relatively intact for millennia. A good example is Field's study region in the 600-meter deep Santa Barbara Basin, off Southern California, where the oxygen-poor waters support very few bottom-dwelling animals that can disturb the sediments.

As a result, Field was able to study fossilized forams in one- to three-meter-long sediment cores reaching back to some 1,400 years before the present. Counting the different species of foraminifera in each layer, he and colleagues discovered that many species of tropical and subtropical forams became more abundant after about 1925. This was consistent with previous studies that suggested an ocean warming trend beginning at about this time.

Then during the mid-1970s, Field's sediment cores showed that tropical and subtropical species of forams became even more abundant during this period, while forams that prefer cooler waters decreased. Again, this was consistent with the many previous studies that have indicated a rapid warming and a dramatic change in eastern North Pacific ecosystems during this period. At this time, species of plankton, kelp, fish and seabirds that prefer warmer waters increased and species favoring colder conditions decreased.

What Field's study provides in addition, however, is the kind of long-term data needed to clarify whether the warming trend and ecosystem changes are within the range of natural variability, or are the result of human activities.

"These data show that ocean warming has affected foram populations prior to the late twentieth century," said Field.  "However, changes since the 1970s have been particularly unusual, and show that ocean ecosystems in the northeastern Pacific have passed some threshold of natural variability." Indeed, he says, the foram community found in the cores was unlike anything seen during the last 1,400 years. As a result, he says, one can argue that the ecosystem changes since the mid-1970s are best explained by recent warming.

Field said that most scientific data about the ocean have been collected during recent decades, after ocean temperatures and marine ecosystems had already begun to change. "It's a classic case of 'shifting baselines'--conditions that scientists think of as normal today might actually be atypical when you look back a few hundred years."

The research was also supported by the Achievement Rewards for College Students-Los Angeles Division, the University of California Ship Funds and Coastal Initiatives, the National Oceanic and Atmospheric Administration, and S. and B. Kimmel.