Hyena Mothers Give Their Cubs a Helpful Dose of Hormones 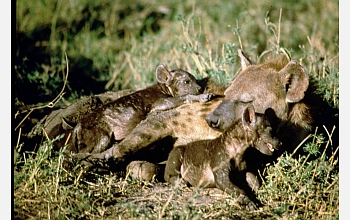 A sleepy female spotted hyena lounges with her seven-week old cubs in Kenya.

Scientists have discovered that a dominant hyena puts her cubs on the road to success before they are born by passing on high levels of certain hormones that make her budding young leaders more aggressive and sexually advanced.

The report, published in the April 27 issue of Nature, is the first study in mammals to demonstrate a relationship between a female's social rank and her ability to influence her offspring's behavior through prenatal hormone transfer. Previously, this phenomenon had only been documented in birds.

Michigan State University's Kay Holekamp, together with her colleagues, spent almost 10 years sampling androgen levels from free-ranging hyenas in Kenya. Androgens are hormones, such as testosterone, that control development of typically masculine characteristics like aggression, muscle development and sexual behavior.

The team found that alpha females had higher androgen levels late in pregnancy when compared to the subordinate, pregnant females in the pack. Consequently, the cubs of the alpha females were more aggressive and exhibited more sexual play, characteristics that elevate the chances for life-success in both sexes.

In hyena packs, male-female social roles are reversed from what is normally found in nature--that is, female hyenas are larger, more aggressive and dominate the group. They even have deceptively male-like genitalia, leading to the misconception that they are hermaphrodites.

According to Jerry Wolff, the National Science Foundation manager whose program helped support this work, "this is a clear example of how the complex integration of genetics, physiology and social environment leads to reproductive success for this species."

Wolff believes that Holekamp's work will create a paradigm shift in how scientists view the establishment of dominance in mammals.

For more information about this work see the Michigan State University press release.