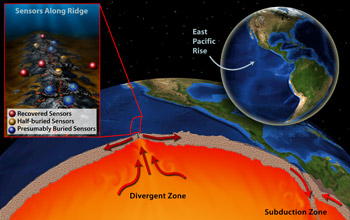 Oceanographers discovered an undersea eruption as it happened last spring.

Nearly 2,500 meters beneath the surface of the Pacific Ocean, magma erupted onto the sea floor last January in a new episode of sea-floor spreading, an occurrence never before caught in progress by scientists.

Geologist Maya Tolstoy of the Lamont-Doherty Earth Observatory in Palisades, N.Y., lead author of a recent Science Express paper on the finding, said that earthquake activity on the sea bottom steadily increased from 2003 to 2005, and predicted that an eruption was imminent.

The research has "exciting implications that we may be able to anticipate future sea floor eruptions," said scientist James Cowen of the University of Hawaii in Honolulu, a co-author of the paper.

Scientists aboard the research vessel (R/V) Knorr confirmed evidence of the volcanic activity in April, 2006, when they tracked the locations of 12 ocean-bottom seismometers (OBSs) designed to monitor earthquake activity on the East Pacific Rise tectonic plate boundary, located south of the Gulf of California.

When only four of the 12 OBSs were recovered, the scientists became suspicious that a lava flow might have covered or damaged them.  Although equipment malfunction was a possibility, the seismometers in previous experiments had been retrieved in 98 percent of deployments.

"If you have to lose instruments on the sea bottom," said Tolstoy, "this is the only way to do it--when the information gained from their loss is extensive. The disappearance of these instruments underscores the importance of real-time monitoring on the sea floor. We learned an enormous amount by having these instruments placed where they were: right on top of the eruption."

The seismometers are part of an ongoing, detailed study of the creation of new sea floor at the East Pacific Rise  sponsored by the National Science Foundation (NSF) through its RIDGE 2000 program, which is investigating mid-ocean ridges and sea-floor spreading centers. The site has been designated one of three focus areas in the RIDGE 2000 program.

"Through efforts like RIDGE 2000, we're getting a glimpse of what will be possible when we are able to monitor seafloor activity of all kinds--tectonic, volcanic, hydrothermal and biological--in real time," said Rodey Batiza, program director in NSF's Division of Ocean Sciences, which funds RIDGE 2000.

In 2006, scientists measured changes in the chemistry of fluids coming out of vents as compared to a previous eruption documented in 1991, and inferred that changes in the flow of undersea magma were happening.

As sea water heated by subsurface magma jets out from cracks in the ocean crust, it rises, then spreads out in a cloudlike formation 200 to 250 meters above the sea floor. In the spring 2006 eruption, the cloud was detected 4 miles south of where active venting was documented. Rocks were dredged from the sea floor in one of the most active areas of venting. The surface of the basaltic rocks was glassy and iridescent, indicating very recent cooling of hot magma by contact with cold seawater.

Other co-authors include Ed Baker of NOAA's Pacific Marine Environmental Laboratory in Seattle, Wash., and Dan Fornari of the Woods Hole Oceanographic Institution in Mass.