Research explains century-old mystery about the interior of the sun 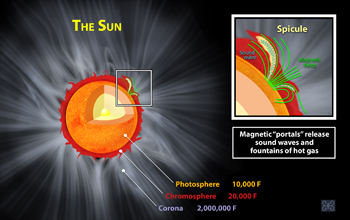 Sound waves escaping the sun's interior create fountains of hot gas that shape and power a thin region of the sun's atmosphere which appears as a ruby red "ring of fire" around the moon during a total solar eclipse, according to research funded by the National Science Foundation (NSF) and NASA.

The results are presented today at the American Astronomical Society's Solar Physics Division meeting in Hawaii.

This region, called the chromosphere because of its color, is largely responsible for the deep ultraviolet radiation that bathes the Earth, producing the atmosphere's ozone layer.

It also has the strongest solar connection to climate variability.

"The sun's interior vibrates with the peal of millions of bells, but the bells are all on the inside of the building," said Scott McIntosh of the Southwest Research Institute in Boulder, Colo., lead member of the research team. "We've been able to show how the sound can escape the building and travel a long way using the magnetic field as a guide."

The new result also helps explain a mystery that's existed since the middle of the last century -- why the sun's chromosphere (and the corona above) is much hotter than the visible surface of the star. "It's getting warmer as you move away from the fire instead of cooler, certainly not what you would expect," said McIntosh.

"Scientists have long realized that observations of solar magnetic fields are the keys that will unlock the secrets of the sun's interior," said Paul Bellaire, program director in NSF's division of atmospheric sciences, which funded the research. "These researchers have found an ingenious way of using magnetic keys to pick those locks."

Using spacecraft, ground-based telescopes, and computer simulations, the results show that the sun's magnetic field allows the release of wave energy from its interior, permitting the sound waves to travel through thin fountains upward and into the solar chromosphere. The magnetic fountains form the mold for the chromosphere.

Researchers say that it's like standing in Yellowstone National Park and being surrounded by musical geysers that pop up at random, sending out shrill sound waves and hot water shooting high into the air.

"This work finds the missing piece of the puzzle that has fascinated many generations of solar astronomers," said Alexei Pevtsov, program scientist at NASA. "If you fit this piece into place, the whole picture of chromosphere heating becomes more clear."

Over the past twenty years, scientists have studied energetic sound waves as probes of the Sun's interior because the waves are largely trapped by the sun's visible surface -- the photosphere. The research found that some of these waves can escape the photosphere into the chromosphere and corona.

To make the discovery, the team used observations from the SOHO and TRACE spacecraft combined with those from the Magneto-Optical filters at Two Heights, or MOTH, instrument in Antarctica, and the Swedish 1-meter Solar Telescope on the Canary Islands.

The observations gave detailed insights into how some of the trapped waves and their pent-up energy manage to leak out through magnetic "cracks" in the photosphere, sending mass and energy shooting upwards into the atmosphere above.

By analyzing motions of the solar atmosphere in detail, the scientists observed that where there are strong knots in the Sun's magnetic field, sound waves from the interior can leak out and propagate upward into its atmosphere.

"The constantly evolving magnetic field above the solar surface acts like a doorman opening and closing the door for the waves that are constantly passing by," said Bart De Pontieu, a scientist at the Lockheed Martin Solar and Astrophysics Laboratory in Palo Alto, Calif.

These results were confirmed by state-of-the-art computer simulations that show how the leaking waves propel fountains of hot gas upward into the sun's atmosphere, and fall back to its surface a few minutes later.