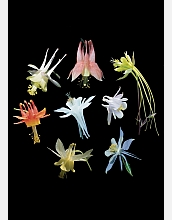 Columbine flowers are growing extra-long spurs in response to pollinators.

In flowers called columbines, evolution of the length of nectar spurs--the long tubes leading to plants' nectar--happens in a way that allows flowers to match the tongue lengths of the pollinators that drink their nectar, biologists have found.

Darwin once proposed a co-evolutionary "race" to explain how natural selection might account for the evolution of very long nectar spurs in flowers, said Hodges. "In Darwin's race, plants with the longest spurs and pollinators with the longest tongues [to tap the flowers' nectar] would be favored by natural selection, and--in a never-ending process--continually drive the plants' spurs and the pollinator tongues to exceptionally long lengths."

But it turns out, Whittall and Hodges found, that evolution acts in a more one-sided fashion in many plants: the plants evolve nectar spurs to match the tongue-lengths of the pollinators. Then the process stops, and only starts again when there is a change in pollinators.

Whittall and Hodges proved this idea by testing the columbine genus Aquilegia, which is pollinated by bumblebees, hummingbirds and hawkmoths.

Whittall and Hodges' work provides evidence that evolution may occur in a stop-and-go pattern--one in which adaptation to specific pollinators occurs very rapidly, followed by periods of no further evolution until another pollinator shift occurs, according to William Zamer, deputy director of NSF's division of integrative organismal systems.

"In the case of these flowers, changes appear to happen relatively rapidly in response to changes in pollinators," said Zamer.

NSF's biocomplexity in the environment emphasis area and division of environmental biology funded the research.