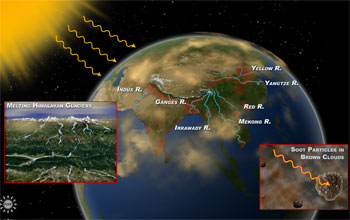 Scientists have concluded that the global warming trend caused by the buildup of greenhouse gases is a major contributor to the melting of Himalayan and other tropical glaciers. Now, a new analysis of pollution-filled "brown clouds" over south Asia by researchers at the Scripps Institution of Oceanography in La Jolla, Calif., offers hope that the region may be able to arrest some of the alarming retreat of such glaciers by reducing its air pollution.

The team, led by atmospheric chemist V. Ramanathan of Scripps, found that atmospheric brown clouds enhanced solar heating of the lower atmosphere by about 50 percent. The results are in a paper in this week's issue of the journal Nature.

The combined heating effect of greenhouse gases and brown clouds, which contain soot, trace metals and other particles from urban, industrial and agricultural sources, is enough to account for the retreat of Himalayan glaciers in the past half century, the researchers concluded.

The glaciers supply water to major Asian rivers, including the Yangtze, Ganges and Indus. These rivers are the chief water supply for billions of people in China, India and other south Asian countries.

"If it becomes widespread and continues for several more decades, the rapid melting of these glaciers, the third-largest ice mass on the planet, will have unprecedented effects on southern and eastern Asia," said Ramanathan.

"In order to understand the processes that can throw climate out of balance, Ramanathan and his colleagues, for the first time ever, used small and inexpensive unmanned aircraft as a creative means of sampling within and from all sides of clouds," said Jay Fein, program director in the National Science Foundation (NSF)'s Division of Atmospheric Sciences, which funded the research. "These measurements led to these remarkable results."

The scientists based their conclusions on data gathered by a fleet of unmanned aircraft during a landmark field campaign conducted in March 2006, in the skies over the Maldives, an island nation in the Indian Ocean south of India.

The Maldives Autonomous unmanned aerial vehicle Campaign (MAC) took place during the region's dry season when polluted air masses travel south from the continent to the Indian Ocean. The air typically contains particles released from industrial and vehicle emissions, and through biomass burning.

Such polluted air has a dual effect of warming the atmosphere as particles absorb sunlight, and of cooling Earth's surface as the particles reduce the amount of sunlight that reaches the ground.

The aircraft, flying in stacked formations, made nearly simultaneous measurements of brown clouds from different altitudes, creating a profile of soot concentrations and light absorption that was unprecedented in its level of vertical detail.

The researchers validated the data from the aircraft with ground-based measurements taken at a station at the Maldivian island Hanimadhoo.

"The main cause of climate change is the buildup of greenhouse gases from the burning of fossil fuels," said Achim Steiner, United Nations under-secretary general and executive director of the UN Environment Programme (UNEP), which helped support the research. "But brown clouds, whose environmental and economic impacts are beginning to be unraveled by scientists, are complicating and in some cases aggravating their effects.

"It is likely that in curbing greenhouse gases we can tackle the twin challenges of climate change and brown clouds, and in doing so, reap wider benefits--from reduced air pollution to improved agricultural yields."

The analysis reveals that the effect of the brown clouds explains temperature changes observed in the region over the last half-century. It also indicates that south Asia's warming trend is more pronounced at higher altitudes.

"The conventional thinking is that brown clouds have masked as much as 50 percent of global warming by greenhouse gases through so-called global dimming," said Ramanathan. "While this is true globally, this study reveals that over southern and eastern Asia, the soot particles in the brown clouds are in fact amplifying the atmospheric warming trend caused by greenhouse gases by as much as 50 percent."

The National Ocean and Atmospheric Administration (NOAA) and NASA also provided funding, as did UNEP, which sponsors the Atmospheric Brown Clouds (ABC) project and operates the Maldives ABC observatory in collaboration with Scripps.