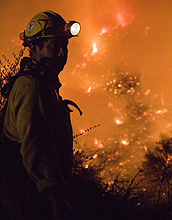 Recent fires in southern California may have released large amounts of carbon dioxide.

Large-scale fires in western and southeastern states can pump as much carbon dioxide into the atmosphere in a few weeks as the states' entire motor vehicle traffic in a year, according to newly published research by scientists at the National Center for Atmospheric Research (NCAR) and the University of Colorado at Boulder.

Their paper, "Estimates of CO2 from fires in the United States: implications for carbon management," is being published online today in the journal Carbon Balance and Management. NCAR's portion of the research was supported by the National Science Foundation (NSF), NCAR's principal sponsor.

"This study provides much-needed insights into the complexities and feedbacks among the Earth's biosphere, geosphere and 'anthroposphere' [human-affected realm]," said Cliff Jacobs of NSF's atmospheric sciences division, which funds NCAR. "These research results are important information for policy-makers."

The authors, Christine Wiedinmyer of NCAR and Jason Neff of the University of Colorado, used satellite observations of fires and a new computer model, developed by Wiedinmyer, that estimates carbon dioxide emissions based on the mass of vegetation burned.

They caution that their estimates have a margin of error of about 50 percent, both because of inexact data about the extent of fires and varying estimates of the amount of carbon dioxide emitted by different types of blazes.

Although last week's fires in southern California broke out after the paper was written, Wiedinmyer applied the new computer model to analyze their emissions.

Her preliminary estimates indicate that the fires emitted 7.9 million metric tons of carbon dioxide in just the one-week period of October 19-26--equivalent to 25 percent of the monthly emissions from all fossil fuel burning throughout California.

Overall, the study estimates that U.S. fires release about 290 million metric tons of carbon dioxide a year, the equivalent of 4 to 6 percent of the nation's carbon dioxide emissions from fossil fuel burning.

"A striking implication of very large wildfires is that a severe fire season lasting only one or two months can release as much carbon as the annual emissions from the entire transportation or energy sector of an individual state," the paper states.

"Enormous fires pump a large amount of carbon dioxide quickly into the atmosphere," Wiedinmyer says. "This can complicate efforts to understand our carbon budget and ultimately fight global warming."

Carbon dioxide emissions from fires pose a significant challenge as policymakers focus on limiting greenhouse gases because of concerns over climate change.

The impacts of fires on climate change are complex and difficult to predict, say scientists. Long after a fire sweeps through an area, new vegetation eventually may absorb as much carbon dioxide as was released during the blaze.

Fires are likely to become more frequent and widespread as temperatures warm around much of the globe, which means that more carbon dioxide may be released into the atmosphere. The fires could complicate efforts to rely on forests to help absorb carbon dioxide.

"The fires that are burning today in the United States are part of the legacy of the past century of fire suppression," says Neff, an environmental scientist.

"Our attempts to control fire have had the unintended benefit of sequestering more carbon in our forests and reducing the impact of human combustion of fossil fuels. However, as these forests now begin to burn, that stored 20th century carbon is moving back into the atmosphere, where it may compound our current problems with CO2."

The study found that evergreen forests in the South and West are the dominant U.S. sources for carbon dioxide emissions from fires. Fires in grasslands and agricultural areas, where vegetation is less dense, emit far less carbon dioxide.

The extent of the fires varies widely from year to year, but typically the emissions have a small peak in the spring from fires in the southeastern and central United States, and a larger peak in the summer during the fire season in the West.