"Keeping up with Joneses" extends to participation in conservation programs 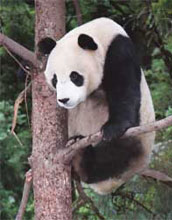 People are more likely to enroll in conservation programs if their neighbors do--a tendency that should be exploited when it comes to protecting the environment, according to results of a new study.

The research, to be published in the journal Proceedings of the National Academy of Sciences (PNAS) this week, is the first to focus on the phenomenon of social norms in the context of China's conservation efforts, said scientist Jianguo "Jack" Liu of Michigan State University (MSU).

The study focused on a mammoth government initiative called Grain-to-Green that pays Chinese farmers to convert cropland back to forest.

"Much of the marginal cropland in rural communities has been converted from agriculture to forests through the Grain-to-Green Program, one of the largest 'payment for ecosystem services' programs in the world," said Alan Tessier, program director in the National Science Foundation (NSF)'s Division of Environmental Biology.

"Results of this study show that a community's social norms have substantial impacts on the sustainability of these conservation investments."

While money is a key factor in whether people sign up for the voluntary program, peer pressure also plays a surprisingly large role, Liu said.

"That's the power of social norms," he said. "It's like recycling. If you see your neighbors doing it, you're more likely to do it."

A representative survey of households in China's Wolong Nature Reserve for giant pandas found that both government payments and social norms had "significant impacts" on citizens' intentions of re-enrolling in the Grain to Green program.

"In other words, people's re-enrollment intentions can be affected by the re-enrollment decisions of their neighbors and tend to conform to the majority," says Liu.

Xiaodong Chen, a doctoral student at MSU and lead author of the paper, said government officials should leverage these social norms along with economic and demographic trends when deciding how to support conservation programs such as Grain to Green.

"We found that, without considering the social norm factor, conservation payments may not be used efficiently," Chen said.

"But if the government considers social norms as it decides where to invest money, it could obtain more environmental benefits in communities that are supportive of these programs than in those that aren't."

Also contributing to the study was doctoral student Guangming He.