New Hope for Fisheries on the Horizon? 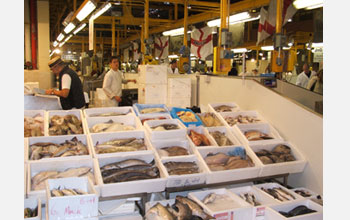 Scientists have joined forces in a groundbreaking assessment on the status of marine fisheries and ecosystems.

The two-year study, led by Boris Worm of Dalhousie University and Ray Hilborn of the University of Washington and including an international team of 19 co-authors, shows that steps taken to curb overfishing are beginning to succeed in five of the 10 large marine ecosystems that they examined.

The paper, which appears in the July 31 issue of the journal Science, provides new hope for rebuilding troubled fisheries. The research was supported by the National Science Foundation (NSF) through its National Center for Ecological Analysis and Synthesis (NCEAS) in Santa Barbara, Calif.

"This is a landmark effort to resolve long-standing and seemingly contradictory conclusions based on the same available data," said Henry Gholz, NSF program director for NCEAS. "It demonstrates the power of synthesis."

Adds David Garrison, director of NSF's biological oceanography program, which funds Hilborn's research, "The results of this study provide hope that, with an increased understanding of ecosystem dynamics and development of creative management solutions, fisheries may be saved."

The study had two goals: to examine current trends in fish abundance and exploitation rates (the proportion of fish taken out of the sea); and to identify which tools managers have applied in their efforts to rebuild depleted fish stocks.

The work is a significant leap forward, the scientists say, because it reveals that the rate of fishing has been reduced in several regions around the world, resulting in some stock recovery. It bolsters the case that sound management can contribute to the rebuilding of fisheries elsewhere.

It's good news for several regions in the U.S., Iceland and New Zealand. "These highly managed ecosystems are improving" says Hilborn. "Yet there is still a long way to go: of all fish stocks we examined, 63 percent remained below target and still needed to be rebuilt."

"Across all regions we are still seeing a troubling trend of increasing stock collapse," adds Worm. "But this paper shows that our oceans are not a lost cause.

"The encouraging result is that the exploitation rate--the ultimate driver of depletion and collapse--is decreasing in half of the ten systems we examined in detail.  Management in those areas is setting the stage for ecological and economic recovery. It's only a start--but it gives hope that we have the ability to bring overfishing under control."

The authors caution that their analysis was mostly confined to intensively managed fisheries in developed countries, where scientific data on fish abundance is collected.

They also point out that some excess fishing effort is simply displaced to countries with weaker laws and enforcement capacity.

While most of the fisheries that showed improvement are managed by a few wealthy nations, there are some notable exceptions.

In Kenya, for example, scientists, managers and local communities have teamed up to close some key areas to fishing and restrict certain types of fishing gear.

This led to an increase in the size and amount of fish available, and a consequent increase in fishers' incomes. "These successes are local--but they are inspiring others to follow suit," says Tim McClanahan of the Wildlife Conservation Society in Kenya.

"We know that more fish can be harvested with less fishing effort and less impact on the environment, if we first slow down and allow overfished populations to rebuild," adds co-author Jeremy Collie from the University of Rhode Island.

"Scientists and managers in places as different as Iceland and Kenya have been able to reduce overfishing and rebuild fish populations despite serious challenges."

The authors emphasize that a range of management solutions are available to help rebuild fish stocks.

They found that a combination of approaches, such as catch quotas and community management, coupled with strategically placed fishing closures, ocean zoning, selective fishing gear and economic incentives, offer promise for restoring fisheries and ecosystems.

However "lessons from one spot need to be applied very carefully to a new area," says co-author Beth Fulton of the CSIRO Wealth from Oceans Flagship in Australia. "There are no single silver bullet solutions. Management efforts must be customized to the place and the people."

According to the authors' analysis, Alaska and New Zealand have led the world in terms of management success by not waiting until drastic measures are needed to conserve, restore and rebuild marine resources.

Some other regions are currently recovering from overfishing: fish abundance has recently been increasing above the long-term average in Iceland, the Northeast U.S. Shelf and the California Current.

This new study is a follow-up to a 2006 paper in Science by Worm and others that highlighted a widespread global trend toward fisheries collapse. The results of that paper led to a public disagreement between Worm and Hilborn. Through their subsequent discussions, however, the two scientists recognized a shared sense of purpose.

The current paper is the result of those meetings.

"Prior to this study, evaluations of the status of world fish stocks and communities were based on catch records for lack of a better alternative," explains Ana Parma of Centro Nacional Patagónico in Argentina. "Results were controversial because catch trends may not give an accurate picture of the trends in fish abundance.

"This is the first exhaustive attempt to assemble the best-available data on the status of marine fisheries and trends in exploitation rates, a major breakthrough that has allowed scientists from different backgrounds to reach a consensus about the status of fisheries and actions needed."

The authors liken their strategy to constructing a "Russian doll," with each nested layer of data adding to the strength and value of the whole.

In looking at the tools that have been used to reduce exploitation rate, the authors note that "some of the most spectacular rebuilding efforts have involved bold experimentation with closed areas, gear and effort restrictions and new approaches to catch allocations and enforcement."

Laws that explicitly forbid overexploitation and specify clear rules and targets for rebuilding were seen as an important prerequisite, for example in the U.S.

While the study suggests that these tools have long-term benefits, they also come with short-term costs to fishers. "Some places have chosen to end overfishing," says Trevor Branch, a co-author from the University of Washington. "That choice can be painful for fishermen in the short-term, but in the long-term it benefits fish, fishermen, and our ocean ecosystems as a whole."

Key among the group's recommendations is to fish at rates lower than those producing maximum sustainable yield (MSY), a long-standing and internationally accepted benchmark for total catch. They call for MSY to be reinterpreted as an absolute upper limit rather than a target, in line with U.N. recommendations.

The authors used ecosystem models to calculate a multi-species MSY (or MMSY) that adds up yield across all species, taking account of their interrelations. That analysis suggests that fishing below MMSY yields just as much fish as exceeding that benchmark, but has many ecological benefits including fewer species collapses, an increase in fish size and fish abundance.

"Below MMSY there is a fishing-conservation 'sweet spot,'" says co-author Steven Palumbi of Stanford University, "where economic and ecosystem benefits converge."

The team also notes that in addition to reducing exploitation rates below MMSY, there are several other measures that can reduce fishing impacts on ecosystems. "Fishing at maximum yield comes at a significant cost of species collapses," explains Heike Lotze, a co-author from Dalhousie University.

"But even low levels of fishing do change marine ecosystems and may collapse vulnerable species. That's why we require a combination of measures, including gear restrictions and closed areas, in order to meet both fisheries and conservation objectives."

The authors caution that much work remains to be done to end global overfishing, as a large fraction of global fisheries are not properly managed, reported or regulated.

Particularly outside wealthy industrialized nations, prospects for reducing fishing mortality are often more limited unless fishers get access to alternative sources of food and income. The authors highlight the need for a more global perspective on rebuilding marine resources.

"Fisheries managers currently presiding over depleted fish stocks need to become fast followers of the successes revealed in this paper," says Pamela Mace, a co-author from the New Zealand Ministry of Fisheries.

"We need to move much more rapidly towards rebuilding individual fish populations and restoring the ecosystems of which they are a part, if there is to be any hope for the long-term viability of fisheries and fishing communities."