Science Board Concerned About Declines in Public Research University Funding

Decade of diminishing funding could impact research and education 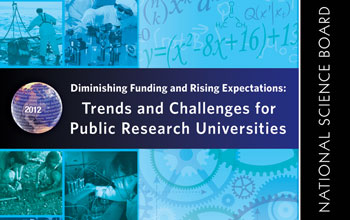 Declines in state funding threaten the ability of major public research universities to educate new scientists and engineers, recruit and retain the best faculty and students, and continue performing top-quality research, according to a new report released today by the National Science Board, the governing body of the National Science Foundation. The NSB said it is concerned with the long-term financial health of these institutions.

State per-student funding for the nation's 101 major public research universities declined by an average of 20 percent in inflation-adjusted dollars between 2002 and 2010, with 10 states experiencing declines ranging from 30 to as high as 48 percent.  In addition to the declines in state funding, increases in enrollment contributed to this national trend.  Enrollment grew nationally by 13 percent--or nearly 320,000 more students--between 2002 and 2010.

The top ten states that had the largest per-student state funding cuts for their major public research universities were:

Seven states bucked the national trend and did not cut per-student funding for their major public research universities between 2002 and 2010.  New York and Wyoming increased funding per student 72 percent and 62 percent, respectively, and Wyoming led the nation in 2010 in funding per student at $16,986 for its single major public research university.

The National Science Board's report states that it "is concerned with the continued ability of these universities to provide affordable, quality education and training to a broad range of students, conduct basic science and engineering research that leads to innovations, and perform their public service missions."

It cautions that a continued decline in state funding "threatens [the major public research universities'] continued capacity to attract the best talent, to provide quality education and training for the next generation of scientists and engineers, and to compete with their private counterparts, and is likely to result in an ongoing increase in tuition and fees."

The report expanded on data from the 2012 edition of Science and Engineering Indicators that examined 101 public research universities that were either among the top recipients of academic R&D funding in the country or the leading recipients in their state.  Highlighting the importance of these universities, the companion report noted that they educate and train the next generation of scientists and engineers--awarding more than half of the nation's doctoral and a third of baccalaureate degrees in these fields--and perform a substantial portion of basic science and engineering research.

"These premier universities are the envy of the world," said Dan Arvizu, the chairman of the National Science Board and director of the National Renewable Energy Laboratory in Colorado. "They play a central role in ensuring that the nation can innovate and compete globally, and they contribute to the economic vitality of their states and to the nation's future prosperity."

Public research universities perform more than 60 percent of the academic science and engineering R&D funded by the federal government. Of the 25 universities with the highest academic R&D expenditures in 2009, 17 were public institutions.  In 2010 alone, research at public universities led to 436 new start-up companies and 2,625 patents.

"At a time of increasing global competition, public research universities are drivers of economic development," said NSB member Ray Bowen, a visiting distinguished professor at Rice University and president emeritus of Texas A&M University.  "All of us should be concerned about their continued strength and ability to educate and conduct cutting-edge research."

"Reductions in revenue of public universities and gaps in salary between public and private universities have the potential to lead to an outflow of talent at public research universities and reduced research capacity," the report warned. That could result in a "greater concentration of talent and R&D in fewer geographical locations and at fewer universities with smaller and less diverse student bodies."

The report noted the importance of these institutions in providing access to affordable, quality education for all students, particularly underrepresented minorities and students from lower socioeconomic backgrounds. The issue of access will take on a heightened importance as increased enrollment in higher education is projected to come from traditionally underrepresented minorities, primarily Hispanic students.  Because more minority students are attending community colleges and private for-profit institutions, the NSB said public research universities should place a greater emphasis on recruiting these students and facilitating successful transfers from community colleges.

"We are also concerned about cuts and tuition hikes that could hinder large populations of students with limited financial means from pursuing science and engineering education at world-class institutions.  We need the talent of all students from all backgrounds, and we need it nationwide," said José-Marie Griffiths, former NSB member and vice president for Academic Affairs at Bryant University.

The National Science Board is the governing body for the National Science Foundation and serves as independent advisors to Congress and the President. The report released today--Diminishing Funding and Rising Expectations: Trends and Challenges for Public Research Universities--is a policy companion report to Science and Engineering Indicators 2012, the NSB's biennial report that provides a broad base of policy-neutral, quantitative information on the U.S. and international science and engineering enterprise.