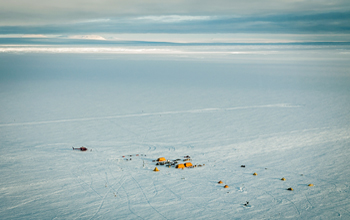 In a finding that is expected to vastly improve models of the global effects of climate change on sea-level rise, a National Science Foundation- (NSF) funded research team, working in one of Antarctica's most challenging environments, has produced the first direct measurements of how relatively warm sea water undercuts a floating ice shelf that normally retards the movement of glaciers from the Antarctic continent to the sea.

Tim Stanton, of the Naval Postgraduate School's Department of Oceanography and lead author of the study, and Martin Truffer, a co-author at the University of Alaska, published their team's findings in the Sept. 13 edition of Science magazine.

The paper documents the mechanism by which seawater eats away at the underside of the 50-kilometer (31-mile) long Pine Island Glacier, which regulates the seaward movement of a portion of the West Antarctic Ice Sheet (WAIS). WAIS contains roughly 10 percent of all Antarctica's ice mass.

When the ice shelves interacting with the oceans melt, the flow of the ice sheets speeds up, releasing fresh water into the ocean and raising sea level.

Given the flow of relatively warm seawater below the glacier, scientists have long known that Pine Island Glacier was melting from below. The accelerated flow of WAIS glacial ice into the Amundsen Sea has been a concern since the late 1980s.

"What we have brought to the table are detailed measurements of melt rates that will allow simple physical models of the melting processes to be plugged into computer models of the coupled ocean/glacier system," Stanton said. "These improved models are critical to our ability to predict future changes in the ice shelf, and glacier melt rates of the potentially unstable Western Antarctic Ice Sheet in response to changing ocean forces."

What the paper lays out, based on the data gathered from one of three boreholes drilled in to the Pine Island Glacier, is the mechanism by which the melting occurs.

"Fresh water forms every time [the sea] injects heat into the shelf," said Stanton. "The warm water starts to melt the ice at the grounding line and creates a buoyant plume called a boundary layer current. We measured the effects of that current for the first time."

The measured glacial melt rates at the Pine Island Glacier site were highly variable, reaching rates as high as six centimeters (two inches) per day within the channel on the underside of the ice, with near zero melt rates on the flanks of the channel. The study results reveal a critical need to understand channelized melting underneath massive glaciers, as they are major contributors to global sea-level rise now and into the future, the authors said.

Although conducting research in Antarctic is often fraught with difficulty, Pine Island Glacier--because of its remoteness, rough terrain and changeable weather--is an especially challenging place to carry out the kind of work needed to produce the recent findings.

Plans initially were made to deploy scientists to Pine Island Glacier during the International Polar Year 2007-2008, a global concentrated deployment of scientists to the polar regions under a collaborative grant that involved a number of investigators. But because of the challenges of working on site, the team only managed to establish the three drilling camps on the shelf between December 2012 and January 2013.

The Division of Polar Program manages the U.S. Antarctic Program, through which it coordinates all U.S. science and the logistics need to support the science on the southernmost continent and in the Southern Ocean.