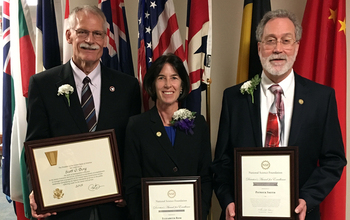 Borg was awarded for exceptional leadership, personal dedication, foresight, and stewardship of the nation's science investments in Antarctica and for his contributions and forward thinking leadership that have both invigorated and ensured world preeminence of the U.S. Antarctic Science Program.

The Presidential Rank Award, granted by the President of the United States and Office of Personnel Management, recognizes extraordinary achievements by career executives in Federal service. These awards recognize the top individuals who have made significant and lasting contributions to their agency and the Federal government.

Rom was awarded for outstanding performance in simultaneously leading the Education Programs in the Division of Polar Programs and the Division of Ocean Sciences, resulting in highly significant program improvements and better value to the science community and NSF.

The NSF Director's Award for Excellence - Program Director/Project Manager, recognizes a program director/officer or project manager whose performance was of such high-caliber that it resulted in the organization achieving significant results.

Smith was awarded for innovative use and re-use of satellite communications for science and operational activities of the U.S. Antarctic Program (USAP), enabling near real-time data transmission to researchers in the U.S. and around the world doing cutting-edge astrophysical research, and serving as an important communications link and morale booster for staff at the South Pole Station.

The NSF Director's Award for Excellence - "You Name It" recognizes an individual for an exemplary contribution, not covered by any other category of Excellence Awards.