A Timeline of NSF History

1944 - November 17: President Franklin D. Roosevelt writes Vannevar Bush, Director of the Office of Scientific Research and Development, asking how the successful application of scientific knowledge to wartime problems could be carried over into peacetime. (President Roosevelt's Letter)

1945 - July 19: Senator Warren Magnuson of Washington introduces a bill to implement Bush's plan, the first of a number of bills offered in response to Bush's suggestions. In later bills, the proposed organization is called the "National Science Foundation," a title first suggested by Senator Harley M. Kilgore of West Virginia in 1945.

1947: Congress passes a bill establishing a National Science Foundation, but President Harry S. Truman vetoes it because it did not give the president authority to name the director of the agency.

1950 - May 10: After three more years of debate, Congress passes and President Harry S. Truman signs Public Law 81-507, creating the National Science Foundation. The act provides for a National Science Board (NSB) of 24 part time members and a director as chief executive officer, all appointed by the president. The first NSB meeting is held December 12. 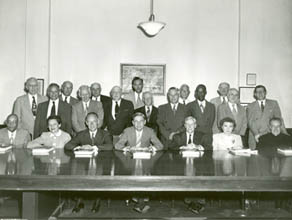 1951 - March: Alan T. Waterman, chief scientist at the Office of Naval Research, is nominated by President Truman to become the first director of the NSF. (Waterman Biography) He is provided with an initial appropriation of $225,000.

1952 - February 1: The National Science Board approves the first 28 research grants to be awarded by NSF. The first grant, for $10,300, goes to the Institute for Cancer Research. A total of 97 research grants are awarded in the first year. Among the recipients is Max Delbruck (Nobel Prize, 1969).

1952 - April: The first predoctoral and postdoctoral fellowships are awarded. Among the recipients are sociobiologist Edward O. Wilson (Pulitzer Prize, 1979 and 1991) and physicist Burton Richter (Nobel Prize, 1976). (The National Science Foundation Class of 1952)

1953 - May: NSF co-sponsors a conference on strengthening college physics teaching on the undergraduate level. NSF is encouraged to expand research opportunities for college faculty and to encourage undergraduate research, which it will do in the ensuing years.

1954 - July-August: An experimental summer program for high school mathematics teachers is held in Seattle, Wash. This marks the beginning of NSF continuing support of educational activities aimed at the kindergarten through high school teaching communities.

1955: NSF receives its first appropriation for support of the International Geophysical Year (IGY). At the request of the National Research Council, NSF is responsible for obtaining and administering government funding for American participation in the worldwide scientific research program. (Science in the Cold War: The Legacy of the International Geophysical Year -- not available online)

The first planning grants are given for the establishment of national radio and optical astronomical observatories.

1956: Construction begins on the National Radio Astronomy Observatory in Green Bank, W.Va. The observatory will be completed in 1962. 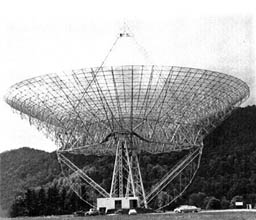 The 300-foot transit radio telescope at the National Radio Astronomy Observatory in Green Bank, W.Va. Completed in September 1962, it was the largest movable radio telescope in the world at that time.

1957 - January 22: The South Pole station is officially dedicated. The United States has six scientific stations established in Antarctica, with funding supplied by NSF.

1957 - October 4: The Soviet Union launches Sputnik I, the first man-made satellite, into orbit. This triggers a national self-appraisal of scientific research and education in the United States. Congress responds by more than doubling the NSF appropriation to $134 million for the twelve months beginning July 1, 1958. Funding for education more than triples.

1958 - July 11: NSF is given the responsibility of establishing a research program for weather modification.

1958 - August 4: The United States Antarctic Research Program (USAP) is established at NSF, with responsibility for coordinating and managing the American scientific program in Antarctica.