Humans and Dolphins: If Brain Size is a Measure, We're Not That Different 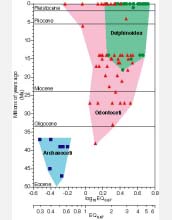 Arlington, Va.—Scientists have determined how brain size changed in dolphins and their relatives over the past 47 million years, and how these species evolved in relation to humans. The results of their research, published online this week in the journal The Anatomical Record, show that, in terms of brain size, humans and dolphins aren't that different.

Lead scientist on the National Science Foundation (NSF)-funded project is Lori Marino of Emory University in Atlanta; colleagues Daniel McShea from Duke University in North Carolina and Mark Uhen from the Cranbrook Institute of Science in Bloomfield, Michigan, are co-investigators on the study.

Dolphin brains are four to five times larger than would be expected for their body size when compared to another animal of similar size. In humans, the measure is seven times larger. "Essentially, the brains of primates and cetaceans arrived at the same cognitive space while evolving along different paths," Marino says. "What the data say to me is that we, as humans, are not that special. Although we are highly encephalized [have large brains], it's not by much compared with cetaceans."

The scientists investigated the fossil record of the toothed whales (which includes dolphins, porpoises, belugas and narwhals) from the order Cetacea, suborder Odontoceti. Many modern toothed whale species (Odontocetes) have extremely large brains – significantly larger than expected for their body sizes and second only to those of modern humans.

"A description of the pattern of encephalization [brain size] in toothed whales has enormous potential to yield new insights into Odontocete evolution: whether there are shared features with hominoid brain evolution, and more generally how large brains evolve," Marino says.

To investigate how the large brains of Odontocetes changed over time, Marino and her colleagues quantified and averaged estimates of brain and body size for fossil cetacean species using computed tomography (CT) scanning, and analyzed these data along with those for modern Odontocetes.

The only data previously available were from a small handful of fossils that provided a very limited record. Marino and her colleagues gathered data and tracked down fossils at the Smithsonian Institution and other museums. A total of 66 fossil crania were CT-scanned and measured. This subset was added to brain and body weight data from 144 modern cetacean specimens.

"The research produced the first understanding of the pattern of change in cetacean brain size relative to body size over 47 million years," says Rich Lane, program director in NSF's division of earth sciences, which funded the research. "Brain size, it turns out, increased significantly in two critical phases in the evolution of these animals."

The first brain size increase occurred with the origin of Odontocetes from the ancestral group Archaeoceti nearly 39 million years ago and was accompanied by a decrease in body size. This change occurred with the emergence of the first cetaceans to develop echolocation - the processing of high-frequency acoustic information used by modern dolphins and other Odontocetes, Marino says. The second major change occurred with the origin of the superfamily Delphinoidea (oceanic dolphins, porpoises, belugas and narwhals) about 15 million years ago. Both increases probably relate to changes in the animals' lifestyles.

Odontocetes have demonstrated behavioral faculties previously only ascribed to humans and other great apes. These abilities include mirror self-recognition, the comprehension of artificial, symbol-based communication systems and abstract concepts, and the learning and intergenerational transmission of behaviors that have been described as cultural. Their large brains likely have enabled these capabilities, says Marino.

The study was also funded by the SETI Institute.