Director's awards will extend work in research and education 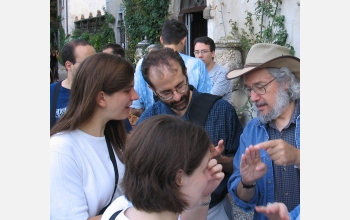 Joe Redish (in the hat) discusses research with colleagues and students at the Enrico Fermi ...

Seven of the nation's leaders in research and education are being honored today by the National Science Foundation (NSF) as Director's Distinguished Teaching Scholars (DTS) for having achieved not only groundbreaking results in research, but for their strong teaching and mentoring skills and major educational contributions.

"The awards are NSF's recognition of accomplishments by scientists and engineers whose roles as educators and mentors are considered as important as their ground-breaking results in research," said NSF Director, Arden L. Bement, Jr. "We're proud of these scholars' deep sense of dedication to spreading their special research talents into many facets of the classroom, into many informal arenas of science and to the public at large."

The seven awards today bring to 34, the number of awards NSF has made since the start of the program since 2001. The DTS grants allow scholars to conduct further research and education activities, or start new ones that benefit their individual fields and the students they support.

McCallum's research, for example, focuses on an advanced area of contemporary mathematics--number theory and arithmetic algebraic geometry. McCallum was a leader in the calculus reform movement that has transformed calculus teaching across the country. He helped found the Arizona Winter School on Arithmetic Algebraic Geometry, which has brought together leading researchers to introduce doctoral students from top graduate schools to areas of leading-edge mathematical research. His new work will focus on better communication among mathematicians, teachers and math education researchers in a systematic content analysis of problems in algebraic thinking that should lead to new instructional materials for a broad range of students.

Ono's work in pure mathematics has resulted in many new finds in modular forms and elliptical curves. His discovery that there is a "family" of Ramanujan congruences for every prime number (named for the Indian mathematician and his studies of how to partition natural numbers), solved an 80-year-old problem among mathematicians, and was listed by Science magazine as the top mathematics discovery of 2000. His work with undergraduates has led to numerous student-published papers, many recognized by national awards. He actively advises K-12 students on science fair projects about number theory. His students often achieved top honors in national and international competitions. His award will help fund summer institutes that will provide high-school and undergraduate students with a structured research environment. It will also allow for Ono to travel to conduct lectures and hands-on activities with middle- and high-school students alongside Nobel Prize and National Medal of Science winners.

In the area of materials, Northwestern's Chang was honored for his important contributions in plasma science and technology, diamond research, high-temperature superconductivity and carbon nanotubes, while expanding undergraduate research as director of a materials research center at Northwestern. He also launched the first NSF Research Experience for Teachers Program in 1993. Chang now directs the nation's first Center for Learning and Teaching in Nanoscale Science and Engineering. His new project will engage young students in the links between science and engineering and society, so they will gain problem-solving skills to prepare them to address practical global issues.

UC-Berkeley chemist Stacy focuses her research on the synthesis and characterization of new solid-state materials with novel electronic and magnetic properties. She has used NSF grants to develop a full-year high-school chemistry course, "Living by Chemistry." She developed a new course in chemistry for non-science majors. Meanwhile, she developed a course in which undergraduate and graduate students teach elementary school students, which spawned similar courses in physics, astronomy and ocean science.

Hu, at UC-Santa Barbara, studies novel nanometer-scale structures and processes of nanofabrication. Her research has led to developments in new areas such as quantum information processing and computation. Hu has established partnerships among university researchers, K-12 and community college teachers and students in mentoring relationships, including encouraging underrepresented minority students. She will use her award to form teams of undergraduate and graduate scholars to create a series of courses on science, economics and the sociology of innovative technologies.

Redish, a physicist at the University of Maryland, was active in nuclear physics for over 25 years. He organized and chaired the high-profile 1989 meeting on cold fusion that played a major role in establishing a more scientific perspective on this phenomenon. Since 1992, Redish has focused on physics education research. He leads a group that is building learning environments to help students develop a better understanding of scientific knowledge. Redish's work in educational simulations and education technology won him several awards. With the DTS award, he will develop new pathways to help more students learn and understand advanced mathematics in science.

Geologist Bierman, at the University of Vermont, has been at the forefront of geomorphology, documenting the rates of processes active at the Earth's surface. He was among the first to apply cutting-edge geochemistry processes to study Earth's bare-rock and soil-covered surfaces across widely differing climates. He has brought together many students to assist in publishing papers and to study how humans and landscapes interact. He has also mentored high- school teachers and graduate teaching assistants. His new award will help extend work on a previous NSF grant that created a web-based archive of more than 10,000 historical images. It will include a research demonstration that brings together students with science and images, new Web tools that will facilitate learning and research. He will also pursue a nationwide effort to disseminate this image-based approach to learning.

"These scholars are true pioneers, whose research is molded into the fabric of education in ways that will benefit many of tomorrow's young scientists," Bement said. "Beyond that, however, there will be many other students--not science or engineering majors--who will likely be influenced by these scholars as they enter the workforce, and because of what they have learned about the value of scientific inquiry, they will contribute to our society in many valuable ways."