Real-Time Traffic Routing from the Comfort of Your Car 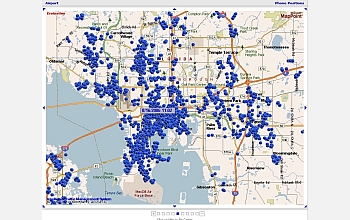 Engineers have developed a system for taking anonymous cell-phone location information and turning it into an illuminated traffic map that identifies congestion in real time.The system takes advantage of the steady stream of positioning cues--untraced signals all cell phones produce, whether in use or not, as they seek towers with the strongest signals. It is the first traffic-solution technology that monitors patterns on rural roads and city streets as easily as on highways.

Developed by IntelliOne of Atlanta, Ga., the TrafficAid system could not only help guide drivers around tie-ups, but also tell emergency responders where accidents are or how effectively an evacuation is unfolding by pinpointing clusters of cell phones.

"Unlike sensors and other equipment along major freeways that are expensive and take years to deploy, our system takes advantage of existing cellular networks in which wireless carriers have already invested billions of dollars," said National Science Foundation (NSF) awardee and IntelliOne CEO Ron Herman, a former engineer and computer scientist.

Herman was inspired by a friend's demonstration several years ago of a proof-of-concept Palm Pilot software that used real-time California Department of Transportation travel-time data to route the drivers around traffic snarls."I was completely sold," said Herman. "I believed then the next 'killer app' for mobile would demand live traffic data for every road--not just select highways equipped with speed sensors--and set out to make it happen."

Creation and development of TrafficAid was supported in part by a grant from the National Science Foundation's (NSF) Small Business Innovation Research (SBIR) program, which directly supports businesses and their partners in academia. The program supported the new system not only for its consumer applications, but also for its potential impact in industry.

Because TrafficAid does not use personally identifiable data, the servers that generate position and traffic information do not know whose phone is showing up in the data stream, only that a particular phone at a given location is moving at a given speed.

From this information, IntelliOne uses its Mobile Positioning System (MPS) to convert ordinary signaling data into phone locations at a rate of two times per second, which in turn is passed to the company's Traffic Determination Engine (TDE), where each phone is matched to the correct road and monitored with other phone locations to produce average speeds and travel times for all roads with cell coverage.

IntelliOne showcased the system at their Need4Speed demonstration in Tampa Bay, Fla., over a 2-week period beginning in mid-August. Journalists, along with representatives from automakers, mapping and traffic companies and federal agencies, rode in test vehicles that negotiated traffic in real time.

Unlike traditional GPS navigation systems that depend on 511-type information, TrafficAid updated much more quickly and accurately represented traffic speeds to within 3-5 miles per hour at any given location.

"The Need4Speed test results exceeded our expectations," said Herman."On several occasions, our TDE out performed the 511 field sensors, especially in areas with heavy construction." Herman was also encouraged by the validation from industry leaders, which will help him as he works to build collaborations with wireless carriers. "We look forward to a very busy 2007," he said.