NSF and Mozilla Announce Winning Big Ideas for New Applications on a Faster, Smarter Internet of the Future 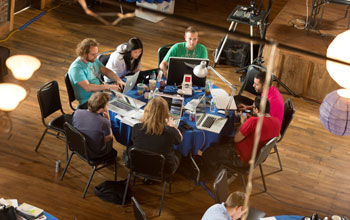 Today, an open innovation challenge called Mozilla Ignite announced eight winning ideas for innovative applications that offer a glimpse of what the Internet's future might look like--and what the lives of Americans may look like as well.

Funded by the National Science Foundation (NSF) and hosted by Mozilla, the challenge called for stellar application, or "app," ideas from anywhere in the world that would advance national priorities such as health care, public safety, clean energy and transportation. This brainstorming round received more than 300 submissions examined by 38 expert judges, who awarded the eight winning teams prizes ranging from $1,000 to $5,000.

The Mozilla Ignite Challenge, launched in June, is part of the Administration's US Ignite Initiative, a coordinated effort to spark next generation public sector applications.

During Mozilla Ignite's brainstorming round, the public was invited to imagine applications that make use of ultra-fast and deeply programmable new networks, such as the NSF-funded Global Environment for Networking Innovation project, or GENI, which is some 250 times faster than networks available today.

"It's important to realize that with any new technology the point isn't just to create technology for its own sake," said Will Barkis, project manager of Mozilla Ignite. "The goal is to build something that has impact. After the challenge was announced, the response was exciting and encouraging, not just in terms of the number of submissions but in quality and creativity and impact embodied in each. We were blown away by the visionary ideas that were truly outside of the bounds of what is possible today."

"We are very excited to see the winners from this first round," added Suzi Iacono, senior science advisor in NSF's Directorate for Computer and Information Science and Engineering. "The goal of US Ignite is to create 60 transformative applications over the next three to five years--apps with real societal impact.

"It's exhilarating to witness the enthusiasm that came through in the submissions and the grand ideas that emerged in this first round," she continued. "As we close the brainstorming contest and start the development phase, I think we are well on our way to achieving that goal."

Imagine the ability to clearly and comprehensively assess an emergency--such as a hurricane, tornado or flood--by integrating data from multiple vantage points in real time from a location miles away from the chaos of the incident itself. Mozilla Ignite's gold medal winner devised an application idea to do just that.

Led by Jeremy Cooperstock of the Shared Reality Lab at McGill University, this team developed an idea for a system for Real-Time Emergency Response Observation and Supervision. The goal is to bring to bear live, high-quality video from multiple feeds and incorporate sensor data from a variety of sources that measure heat or smoke levels, for instance. The potential app would use massive computing capacity to perform these functions and inform decision-making and improve coordination of emergency responders. These tools would be powerful indeed in the hands of the right people, namely firefighters and rescue workers on the front lines of responding to emergencies of all sorts.

A silver medal was awarded to a Purdue University team led by George Adams for an idea that aims to improve efficiency, profitability and quality in America's manufacturing processes. Remote Process Control Using a Reliable, Real-Time Protocol would set forth reliable, fast and real-time networks that would allow people to remotely control advanced manufacturing processes like 3D printing, for instance. This app could be a technological building block for other complex apps that might use 3D videoconferencing and eventually holograms.

A second silver medal goes to a cutting-edge Real-time 3D Interactive Telepresence idea that would far surpass today's teleconferencing capabilities, developed by a Seneca College, Toronto, team lead by Andor Salga of XBPointStream. There are also many potential applications for teaching and learning.

Two 2010 engineering graduates from Boston University--Amr Ali and Dmitri Boulanov--offered up an idea that earned them a bronze medal: a Long-Term Monitoring and Crisis Management System. Capitalizing on the ever-present and diverse sensors that are revolutionizing today's healthcare systems, the idea for this app would let patients and their doctors pull together a patient's own health data in real-time for speedy, comprehensive diagnosis and crisis prevention. This concept has broad application, from home monitoring and doctor-patient interaction to hospitals having access to patient records located anywhere in the "cloud."

Fred Dixon and his BigBlueButton team submitted the bronze-medal winning idea of High Quality Open Source Web Conferencing, with which every student could have access to a high-quality education no matter where they live. Their proposed app would create remote classroom experiences in a meaningful and effective way--for grades K through infinity.

All work and no play make Jack a dull boy, as the saying goes. Such could be the mantra of Virginia Tech/MIT graduate Bob Summers in offering his bronze medal- winning idea, Kinect Health 3D. The claim is intuitive: Physical therapy and fitness are easier in game form, and playing games with friends beats playing games alone.  This application imagines a set of embedded health sensors and televisions that are intelligently networked to create a social fitness game. Beyond fitness, this app would enable remote physical therapy and with its quantified health data, could also empower physicians and specialists to engage in long-term assessment and tracking for early detection and intervention.

Cars are getting smarter and the entire transportation infrastructure should too, asserts Eric Endlich and Julian Valencia of EndlichStudios. And the judges found their argument and this app idea compelling, awarding it a bronze medal. Smart Streets for Smart Cars would enable a slew of services that could help reduce traffic, save energy and make roads safer using sensors and artificial intelligence to turn streetlights into a big network.

How can multiple-perspective video be effectively woven together to improve understanding of complex events and contribute to public safety? Camille Crittenden and her team from Data and Democracy Initiative at the University of California, Berkeley's Center for Information Technology Research in the Interest of Society submitted a bronze-medal winning idea. Rashomon would index videos, allowing people to experience an event from many perspectives, zooming in or replaying videos to examine particular moments in detail. This technical building block could have widespread application as a means to derive important lessons from past events and inform policymakers on how to better prepare for future ones.

Next Steps: The Development Rounds

Today marks the start of the first of three development competition rounds, with $485,000 available overall for funding project development proposals. Mozilla Ignite invites developers everywhere to make these and other big ideas a reality. Participants may propose to collaborate on an existing idea or submit their own entirely new app development idea. The participation of international applicants is encouraged as long as they are members of U.S.-led teams. Applicants must ship some working code by October 25 to be eligible for early funding. Interested participants will gain access to NSF's GENI testbed to test their applications.

In addition, applicants will be eligible for expert mentorship and access to special resources. Apps will be judged by industry professionals and thought leaders like Tim O'Reilly, one of the best computer book publishers in the world; Connie Yowell of the MacArthur Foundation; Andrew McLaughlin of Tumblr; Susan Crawford of the Cardozo Law School; Brian Behlendorf of the World Economic Forum; John Lilly of Greylock Capital; Werner Vogels of Amazon; Aneesh Chopra, the former U.S. Chief Technology Officer and more.

"After an awesome period of brainstorming and imagination, we're now asking developer teams to show us some of their best ideas running in code," said Barkis. We're not looking for finished apps, just progress in that direction. We'll be disbursing the first $85,000 in awards this November, $150,000 in January 2013 and $250,000 in April 2013."