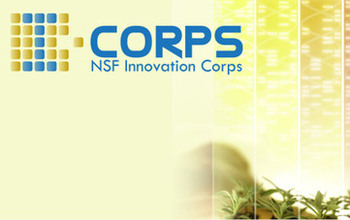 More than 300 teams have completed the NSF I-Corps curriculum since the program began in July 2011.

A new collaboration between the National Science Foundation (NSF) and the National Institutes of Health (NIH) will give NIH-funded researchers training to help them evaluate their scientific discoveries for commercial potential with the aim of accelerating the translation of biomedical innovations into applied health technologies.

I-Corps™ at NIH is a pilot of the NSF Innovation Corps™ (I-Corps™) program specially tailored for biomedical research. Academic researchers and entrepreneurs with Small Business Innovation Research and Small Business Technology Transfer (SBIR/STTR) "phase one" awards--awards that establish feasibility of proof of concept for commercializable technology--from participating NIH institutes will be eligible to apply to I-Corps™ at NIH. NIH will hold a June 25 program briefing at the 2014 BIO International Convention in San Diego and a webinar on July 2 to begin its outreach to the small business research community.

The I-Corps™ Teams curriculum at NIH will be a nine-week boot camp in which experienced, business-savvy instructors work closely with teams of researchers to help them explore potential markets for their federally funded innovations. I-Corps™ grantees use a hypothesis-validation approach to customer discovery that resonates with scientists and engineers. While I-Corps™ instructors typically have a wide range of expertise, the I-Corps™ participants from NIH will be taught by instructors who have biomedical business experience.

"This new collaboration with NIH is further evidence of the flexibility and efficacy of the I-Corps™ model," said Pramod Khargonekar, NSF assistant director for Engineering. "Translating basic biomedical research to the marketplace has its own particular set of challenges, which we recognize. By focusing and adapting the I-Corps™ curriculum to the life sciences, we expect biomedical researchers will be better-equipped to enter the business arena."

Michael Weingarten, director of the NCI SBIR Development Center, said he and his colleagues initially reached out to NSF because they witnessed the difference I-Corps™ lessons made for the graduates. To date, more than 300 three-person teams have completed the NSF I-Corps™ Teams training, including those supported by the Department of Energy's Advanced Research Projects Agency (ARPA-E).

"I-Corps™ will help teach NIH-funded start-ups how to build scalable business models around new technologies they're developing for the detection and treatment of disease," Weingarten said. "The program sheds new light on how companies can deal with important business risks such as protecting intellectual property and developing regulatory and reimbursement strategies."

As it does at NSF, the I-Corps™ program at NIH will supplement awardees' scientific skills through real-time interactions with more than 100 potential customers to validate their technology's market potential. The 24 selected teams will receive supplemental funding from NIH to support entrepreneurial training, mentorship and collaboration opportunities.

NIH awards more than $700 million in SBIR/STTR research and development awards each year. "This pilot will leverage NIH's robust SBIR/STTR program and further NIH's mission to advance our understanding of human illness and treatment of disease and disability," said NIH SBIR/STTR program coordinator Matthew Portnoy. "We look forward to this collaborative endeavor with NSF."

In addition to the pilot, existing NIH-funded programs can apply to become new NSF I-Corps™ sites to broaden the I-Corps™ network. These programs include the NIH Centers for Accelerated Innovation and Research Evaluation and Commercialization Hubs, which focus on academic researchers with technologies that have not yet led to the formation of a startup or have been licensed by an existing company.

All people and organizations involved in I-Corps™ become part of the NSF-established National Innovation Network, a nationwide web created to leverage the community that has developed among the grantees to increase the program's impact.

NCI will lead NIH outreach to the small business community in coming weeks, beginning with the June 25 briefing at the BIO International Convention and the July 2 webinar. Steve Blank, a serial-entrepreneur and academic who developed the original course that I-Corps™ is based on, will participate in both events.