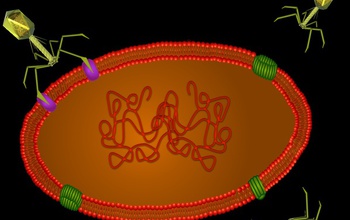 Graphic of viruses attempting to "dock" on a microbial mat, using the tips of their tails.

Strange creatures live in the deep sea, but few are odder than the viruses that inhabit deep ocean methane seeps and prey on single-celled microorganisms called archaea.

The least understood of life's three primary domains, archaea thrive in the most extreme environments on the planet: near hot ocean rift vents, in acid mine drainage, in the saltiest of evaporation ponds and in petroleum deposits deep underground.

Virus in the deep blue sea

While searching the ocean's depths for evidence of viruses, scientists have found a remarkable new one, a virus that seemingly infects archaea that live beneath the ocean floor.

The researchers were surprised to discover that the virus selectively targets one of its own genes for mutation, and that this capacity is also shared by archaea themselves.

The findings appear today in a paper in the journal Nature Communications.

"Life far beneath the Earth's subsurface is an enigma," said Matt Kane, program director in NSF's Division of Environmental Biology. "By probing deep into our planet, these scientists have discovered new information about Earth's microbes and how they evolve."

"Our study uncovers mechanisms by which viruses and archaea can adapt in this hostile environment," said David Valentine, a geoscientist at the University of California Santa Barbara (UCSB) and co-author of the paper.

The results, he said, raise new questions about the evolution and interaction of the microbes that call the planet's interior home.

"It's now thought that there's more biomass inside the Earth than anywhere else, just living very slowly in this dark, energy-limited environment," said paper co-author Sarah Bagby of UCSB.

Using the submersible Alvin, Valentine and colleagues collected samples from a deep-ocean methane seep by pushing tubes into the ocean floor and retrieving sediments.

The contents were brought back to the lab and fed methane gas, helping the methane-eating archaea in the samples to grow.

When the team assayed the samples for viral infection, they discovered a new virus with a distinctive genetic fingerprint that suggested its likely host was methane-eating archaea.

The researchers used the genetic sequence of the new virus to chart other occurrences in global databases.

"We found a partial genetic match from methane seeps off Norway and California," said lead author Blair Paul of UCSB. "The evidence suggests that this viral type is distributed around the globe in deep ocean methane seeps."

Further investigation revealed another unexpected finding: a small genetic element, known as a diversity-generating retroelement, that accelerates mutation of a specific section of the virus's genome.

Such elements had been previously identified in bacteria and their viruses, but never among archaea or the viruses that infect them.

"These researchers have shown that cutting-edge genomic approaches can help us understand how microbes function in remote and poorly known environments such as ocean depths," said David Garrison, program director in NSF's Division of Ocean Sciences.

While the self-guided mutation element in the archaea virus resembles known bacterial elements, the researchers found that it has a divergent evolutionary history.

"The target of guided mutation--the tips of the virus that make first contact when infecting a cell--is similar," said Paul.

"But the ability to mutate those tips is an offensive countermeasure against the cell's defenses, a move that resembles a molecular arms race."

Having found guided mutation in a virus-infecting archaea, the scientists reasoned that archaea themselves might use the same mechanism for genetic adaptation.

In an exhaustive search, they identified parallel features in the genomes of a subterranean group of archaea known as nanoarchaea.

Unlike the deep-ocean virus that uses guided mutation to alter a single gene, the nanoarchaea target at least four distinct genes.

"Bacteria had been observed to target two genes with this mechanism. That may not seem like a huge difference, but targeting four is extraordinary."

According to Valentine, the genetic mutation that fosters these potential variations may be key to the survival of archaea beneath the Earth's surface.

"The cell is choosing to modify certain proteins," he said. "It's doing its own protein engineering. While we don't yet know what those proteins are being used for, learning about the process can tell us something about the environment in which these organisms thrive."